OK – that’s a bit over stated.   The low standard deviation of GDP growth is primarily an artifact of low GDP growth numbers

I like 13 because it’s a Fibonacci number, but it’s also the duration in quarters of the current remarkably stable GDP growth, so let’s see how it works over time.

Yes the standard deviation is dropping like a rock for the last 5 quarters.  It dropped like a rock from 1952 to 57 [with three separate stages that were each comparable to what we are seeing now,] from 1961 to 1965 in two stages, and from 1984 to 88 in two stages.  It always drops after a recession – sometimes like a rock and sometimes in a more leisurely fashion.  The reason that the bottom values were higher in those earlier periods than what we’re seeing now is that the GDP numbers were bigger. 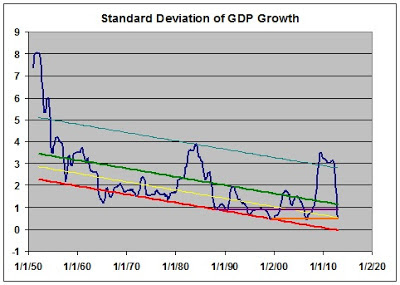 A red line connects most of the local minima.  A parallel green line is rather arbitrarily projected from the 1991 maximum.  An orange horizontal line is projected forward from the 1999 minimum of 0.46.  The standard deviation stayed in the range of 0.47 to 0.48 for the next three quarters.  Along with the last two quarters of 2006, at 0.47 and 0.45, respectively, these are the 6 quarters since 1947 with lower standard deviation values than the current 0.53.  The current value is, in fact, only at the mid range of the trend channel.

A purple horizontal line is projected forward from the 1988 low of 0.90.  The reading immediately prior to the current one, at 1.11, was above that level.  So we find the current reading is the 7th from the lowest on record.  Only now with the last reading, has the standard deviation fallen low enough to enter a range of values at or below 0.90 that includes 33 of the preceding 100 quarters.

I think the really remarkable thing about recent events is the steepness and height of the climb from mid ’08 to mid ’09, caused by the great recession.  The precipitous fall from Q1, 2012 is just one more reversion from an extreme.

Not everyone shares my fascination with trend lines, and you can certainly quibble with the width of the channel I’ve drawn.  But I think there are two indisputable facts.

1) The standard deviation of GDP growth has been trending down since the end of WW II.  The rate of decrease has been far lower in the great moderation than it was prior to 1965.

2) The current value of the standard deviation is not in any way remarkable over the last 25 years, or even the last 50 if you accept my trend line view.

It’s certainly possible that the standard deviation will continue to drop for the next few quarters.  But it can’t fall below the lower trend line, since it has already crossed the theoretical minimum of 0.00.

It’s also possible that we’ll slip into another recession and the standard deviation will balloon again.

The first most effective way is to have remarkably low GDP growth.

In my view, this is not remarkable stability.  It is the American economy enduring a slow and agonizing death.

There’s another more nuanced way of looking at the data that we’ll get to it in part 3.

Coronavirus dashboard for September 19: no, the pandemic is *not* over