In comments here, Mark Sadowski says a lot of thoughtful things, including this:

Beckworth is claiming that AD growth has been steady despite fiscal contraction which it has. In fact the standard deviation of the quarterly growth rate in nominal GDP (NGDP) since 2010Q1 is by far the lowest for any 13 quarter period on data going back to 1947. Many Fed watchers have been stunned by the amazing steadiness of the NGDP numbers despite all the various fiscal policy shifts (or cliffs) and this raises serious doubts as to the existence of a liquidity trap.

I’ll admit, it’s not at all clear to me how the serious doubts follow from the amazing steadiness when GDP growth is stuck in the mud, but it’s that steadiness that I want to focus on – eventually. As you can see, GDP growth has certainly been steady over the last three years, albeit at a remarkably low level.  Market monetarists argue that since monetary policy has been inept and fiscal policy has not been expansionary, this steady growth casts serious doubts on the efficacy of fiscal policy.

Why can’t one simply turn this around and say that since fiscal policy has been inept and monetary policy has not been expansionary, this steady growth casts serious doubts on the efficacy of monetary policy?  Either way it makes very little sense.  And you’ll note that supporters of fiscal policy never make this kind of claim.

But let’s get back to GDP growth.  Remember the simplicity of Graph 1, because in Graph 2, I’m going to make it very busy. 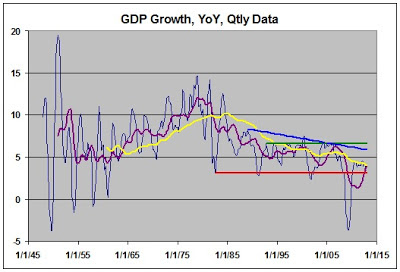 The purple line is a 13 quarter moving average and the yellow line is a 13 year moving average.  Both have been in decline since the early to middle 80’s.  The red line is the growth level at the bottom of the 1982 trough – effectively a lower limit to GDP growth until the 2009 collapse.   The green line is the growth level of the 1993 recovery – effectively an upper limit to GDP growth that we may never again experience.  The blue line connects peaks since 1989.  The downward trajectory is both unmistakable and disturbing.  This is the legacy of Reaganomics, deregulation, globalization, a bloated rent-collecting finance sector, and growing inequality.

That will be the subject of part 2.