First off, I want to thank Mark Sadowski for contributing, in a gadfly sort of way, to my thinking on this issue with his comments in Parts 1 and 2.  So, this is not the part 3 post I had intended to write.

Mark suggested using a different transformation of the FRED NGDP series I’ve been looking at.  Instead of taking YoY % change, he suggests using what FRED calls Compounded Annual Rate of Change [henceforth CARC.]  Check the linked graphs and you’ll see there’s both more fine grain movement and swings to greater extremes in the CARC graph, and, as expected, the Standard Deviation values are higher.  This is a different way of looking at the data.  But is it a better way?  I have no idea.  If you have a convincing argument either way, let’s see it in comments.

Graph 1 shows the 13 Qtr Std Dev of CARC.  It’s gross features are generally similar to the those of the graph of Std Dev of YoY Change.  There’s the steep fall bottoming in 1964, the rise into a broad double peak in 1981-3, followed by a steep drop to a bottom in 1987. Then we see the humps caused by the ’91 and ’01 recessions, and finally the sharp rise and fall due to the Great Recession. [In the YoY graph some of these extremes are displaced by about a year.] 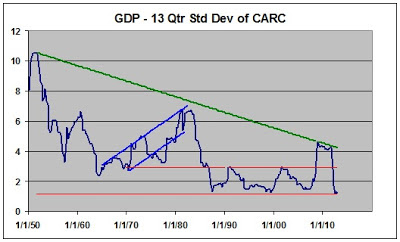 The major difference between the two graphs occurs after the 1987 bottom.  While the YoY  Std Dev graph continues to slope down, the CARC Std Dev graph moves in a generally horizontal direction between the two red lines drawn from the Q4 ’90 high of 2.95 and the Q3 ’12 low of 1.17.  Note however, that if the ’91 recession had been worse or the ’01 recession milder, we would still perceive a downward tendency to the peaks.

What accounts for the high Std Dev readings of the 70’s and 80’s – or, alternatively, what accounts for the low readings now?  To explore this question, let’s indulge in a couple counter-factual exercizes.  But first, let’s ponder what causes the Std Dev to be high, in general.

The main factors, in no particular order are

– The data irregularity within the envelope – frex, does it gyrate wildly from extreme to extreme, or meander in a more leisurely fashion.

In the context of NGDP growth these factors become

– Average NGDP growth over a period of interest.

– The presence or absence of recessions.

– The growth variablilty in non-recessionary times.

Here’s where our first counterfactual comes in.  Suppose that the steep double dip recession of 1980-82 had never happened, or that it had occurred, but with only gradual recoveries from the troughs.  These possibilities are illustrated in Graph 2. 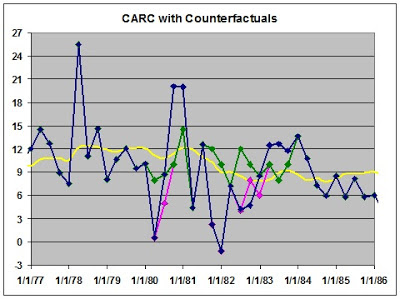 The blue line is actual CARC, The green line is a made-up version of CARC without the recessions.  The pink line shows the recessions, but with smoothed recoveries and no snap back.  Graph 3 shows the the 13 Qtr Std Devs for these data sets, with the same color coding. 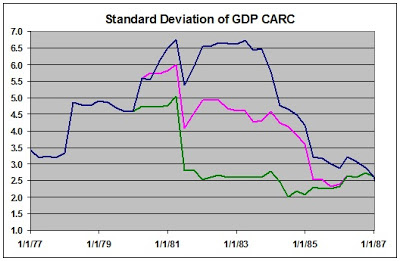 Note also the sharp jump in Std Dev at Q2 ’78, and the following plateau.  This is entirely due to a single quarter of ridiculously high NGDP growth during the moribund Carter administration, and illustrates how a single anomalous data point can distort the Std Dev calculation for an extended period. The plateau ends at Q3 ’81 when this point falls out of the 13 Q data kernel.

In comments to Part 1, Mark Sadowski asked if lower volatility isn’t a good thing.  My answer is — only maybe.  If it’s caused by avoiding recessions, then yes.  But if it’s caused by lopping off the potential tops of recoveries, such as what we have experience these last three years, then no – not at all.

Here’s another counterfactual to ponder.    What would the Std Dev of CARC have been in the period we just looked at if NGDP growth were at the current level, but the relative volatility had remained the same?  From Q2 ’78 through Q3 ’84, CARC averaged 9.93%.  Suppose a counterfactual of 4.01% average CARC, which is what we have experience from Q3 ’09 through Q1 ’13, the recovery from the great recession.  This is illustrated in Graph 4. 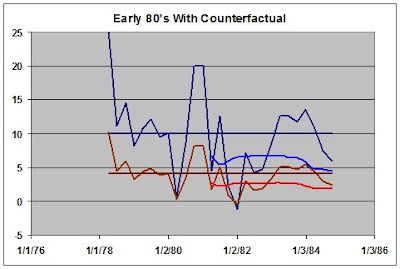 The dark blue line is the actual CARC data.  The horizontal blue line is the period average of 9.93.  The brown line is the counterfactual CARC data, constructed by having each point be above or below the average of 4.01 [brown horizontal line] by the same percentage as the corresponding real data point. The light blue and red lines show the 13 Q Std Dev values for the two data sets, respectively.  The Std Dev value for the entire real data set is 5.92.  The Std Dev for the counterfactual data set is 2.39.  This is again a reduction of just about 60%.

Also, if you consider the volatility level of Q2 ’78 to Q4 ’84 along with the CARC level following the Great Recession, the Std Dev drops by 59.7% from 5.92 to 2.39.  So this gives me another answer to Mark’s question:  If the low Std Dev is an artifact of low NGDP growth, then no, it’s not a good thing at all.

These examples suggest that both the occurrence of recessions and the high level of NGDP growth just before the start of the alleged great moderation were about equally as important in contributing to the high Std Dev of that era.

So I have to modify my idea about the relative importance of these two factors in making Std Dev high or low.  A low NGDP growth rate is only AS important, not MORE important than avoiding recessions

Remember, the point of this exercise is to show that the low volatility of current NGDP growth is neither remarkable, nor necessarily a particularly good thing.   I think I’m getting there.

Next, In Part 4, I’ll look at what I originally intended to look at in Part 3.  Stay tuned.