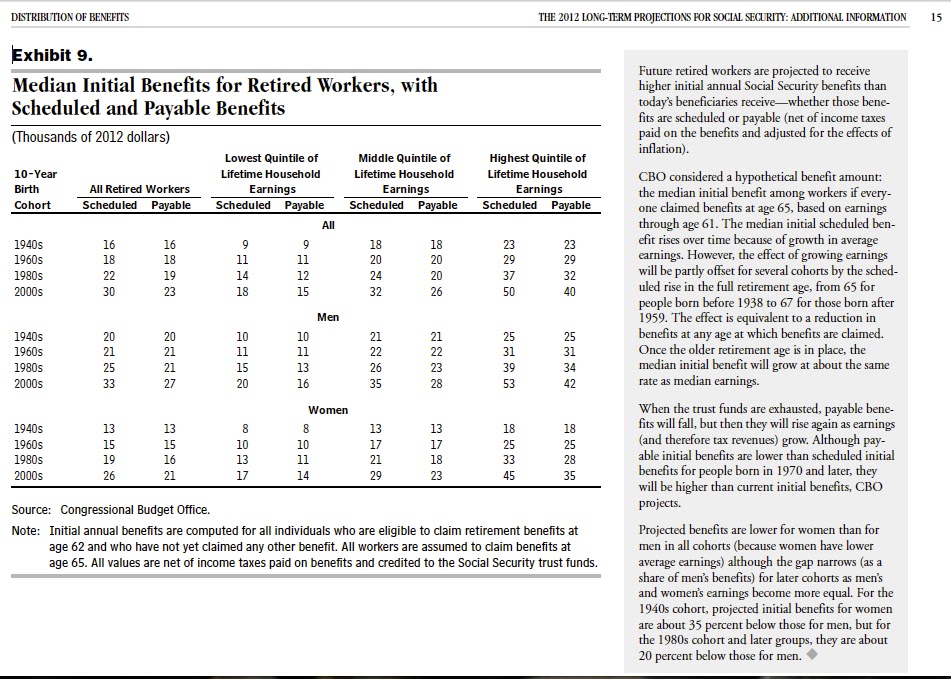 ‘Rosser’s Equation’ is something between an in-joke and tribute to Prof. Barkley Rosser, Jr of JMU, an economist friend of mine who pointed out a surprising result: real payable benefits after projected Trust Fund depletion and subsequent 25% cut will still be higher in actual basket of goods terms than those of current retirees. This is because the scheduled benefit formula delivers something like 160% of the current benefit and as Prof Rosser pointed out to me long ago 75% of 160%=120%.

The above Exhibit 9 from CBO’s 2012 Long Term Projections for Social Security resolves Rosser’s equation for selected demographic cohorts and income quintiles. And the results show that the retiree born in 1947 who reached FRA (Full Retirement Age) in 2012 would see an initial benefit ranging from $10k to $25k and representing 100% of the schedule. On the other hand the retiree born in 1970 and who will reach FRA at age 67 in 2037, that is after TF Depletion would see initial benefits in 2012 dollars ranging from $12k to $33k.

Now there is no doubt that an overnight 25% cut in benefits at Trust Fund Depletion would represent huge sticker shock for then retirees. And there are very good reasons based in societal equity for scheduled benefits to rise at the real rate the formula delivers. As such we should make every effort to find ways of closing the gap between payable and scheduled from the bottom up rather than forcing scheduled down simply to avoid the shock of of cut. Because the risk is that the ‘cure’ might deliver a worse result in real terms than the ‘crisis’ left unaddressed.

Which is why I have been maintaining for years that ‘Nothing’ IS a Plan. Not as good a plan as it was when Prof Rosser and I started corresponding five plus years ago, circumstances have changed. Still it represents the “First Do No Harm” alternative, after all a check in 2040 20% better in real terms than an equivalently situated retiree gets today doesn’t exactly meet the definition of existential crisis for Social Security.