If I Were Looking for Structural Changes…

…I would not be likely to find them.  But at least I know how to look. Start at the macro level and see if there is a noticeable shift in revenues: 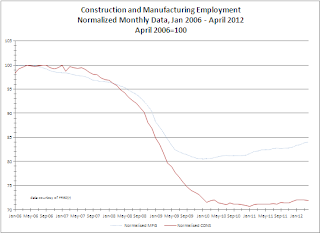 As expected (by definition, as it were), Construction plummeted, and now appears to have “leveled off” in the range of a 25-30% decline from its peak. But Manufacturing, even as it represents the shifted share-of-GDP also plummeted and has “recovered” only to about a 15% decline since the same point.  So let’s see if we can see the shift if we measure employment in the two areas using the NBER-designated “trough” of June 2009 as our baseline.  Then we have: 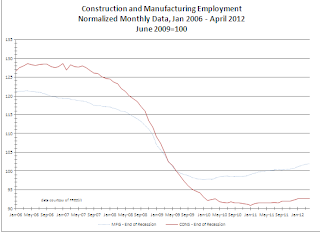 What we see here is that, while there has been a GDP ratio shift, there is not a notable hiring trend–an increase of less than 2% in nearly three years–certainly not enough of a trend (even adjusting for the difference in employment totals) that we can say that there is unsatisfied demand in the Manufacturing sector.  And that is from a “trough” in the economic cycle.

Looking solely at the net change in employment between the two sectors since the Recession ended makes it clear that there is a lack of demand, not supply: 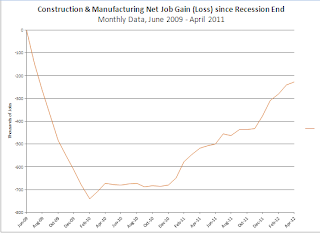 As Johnathan Portes (h/t Brad DeLong) notes (of the UK, but the U.S. situation is the same)

“with long-term government borrowing as cheap as in living memory, with unemployed workers and plenty of spare capacity and…suffering from both creaking infrastructure and a chronic lack of housing supply, now is the time for government to borrow and invest.  This is not just basic macroeconomics, it is common sense.”