Construction Employment in the Inland Empire

Rumors of the housing market’s demise are probably premature.

Yes, inventories are rising and price appreciation has slowed – and even some small price declines have been reported in Boston and anecdotally in San Diego. Also activity has slowed in some areas, like Northern California. But overall, inventories are still in line with a healthy market (4 months of supply).

Interest rates are also rising, but purchase mortgage applications are steady. And rates dropped last week for a 30 year mortgage; the first significant decline in over 2 months.

But there are hints that the long awaited housing slowdown has begun. Anderson Forecast’s Dr. Thornberg wrote in October:

The best indicator that the party is starting to end will be a decline in overall market activity – slowing of total unit sales and build up of inventories. When inventories rise and sales start to fall this will spill over into price appreciation and construction within three to six quarters, and this is when the overall economy will begin to feel the pinch. Right now the market appears to be at a crossroads. According to the latest numbers available, market inventories in the state have almost doubled over the past six months and overall market activity has been flat albeit at a very high pace.
…
… things are clearly at a tipping point. And remember, while it is unlikely that nominal home prices will fall rapidly, that does not mean a cooling market will do little damage to the economy. A cooling market is characterized by a large drop in new building units, market activity, and refinancing activity, not to mention heightened foreclosure activity. A lot of the new jobs in those areas will suddenly start to disappear. And don’t forget those wealth effects. When consumers realize they can no longer expect that appreciation bonus to subsidize their consumption habits, they will very likely pull back on spending. Keep an eye out.

For jobs, my blog has excerpts from four stories on housing and employment.

And that brings me to California’s Inland Empire.

Of all the areas experiencing a housing boom, the areas most at risk have had the greatest increase in real estate related jobs. These jobs include home construction, real estate agents, mortgage brokers, inspectors and more. The following graph uses NSA construction jobs for comparison purposes. 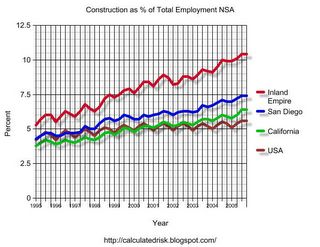 Not surprisingly, California has become more dependent on construction than the rest of the country, and construction has really boomed in San Diego. But San Diego has nothing on the Inland Empire.

I believe that areas like the Inland Empire will suffer the most when housing activity slows.