Housing: Ready for the Fall

Fall is in the air. For us Southern Californians that means the first rains of the season. For the seasons of the housing market, it means falling real prices.

Although we will not know for sure until the Q3 OFHEO House Price Index is released on December 1st, it is very likely that real housing prices declined in Q3 2005; the first significant real decline since the end of the last housing downturn in 1996. A combination of slowing nominal price gains (from anecdotal evidence) and higher inflation will most likely lead to declining real prices. Friday’s BLS CPI report showed ‘CPI less shelter’ increased 3.3% in the 3rd quarter (a 13.9% annual rate), a high hurdle for nominal prices.

It is true that most observers only care about nominal prices, but in the previous housing slowdowns, negative real prices were an excellent leading indicator for falling nominal prices.

And looking at the overextended American consumer, the housing market is ready for a fall. The Federal Reserve’s Financial Obligations Ratios report shows consumers are dedicating a record percentage of disposable income to housing. Here are some interesting numbers from the Flow of Funds report:

From 2000 to 2005 (Q2 annual rate), Personal Income increased from $8.43 Trillion to $10.2 Trillion, a real increase of 5.1% over 5 years. However mortgage obligations(1) increased from $662 Billion to $951 Billion; a real increase of 24.4% over the same period. Even with low interest rates, Americans have dedicated a substantially larger portion of their income to housing.

The following chart shows the growth of US Households mortgage obligations. Part of this increase is due to the sharply higher property taxes. 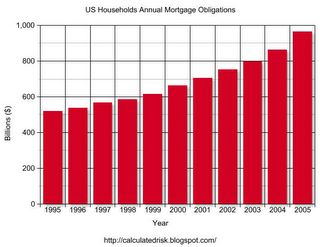 And mortgage obligations are posed to increase substantially in the near future as many mortgages become adjustable. From the NY Times in June: The Trillion-Dollar Bet

But in 2007, the portion will soar, with $1 trillion of the nation’s mortgage debt – or about 12 percent of it – switching to adjustable payments, according to the analysis.

With record mortgage obligations, rising interest rates combined with a large number of mortgages becoming adjustable, and other stresses on the US consumer (like fuel costs), it appears Housing’s Fall is nigh.