My thoughts are with the residents of New Orleans and the Gulf Coast tonight.

This week two prominent economists predicted a housing bust and possible recession in ’06; three if you count Chairman Greenspan. Actually Greenspan’s comments, made at the Federal Reserve’s Jackson Hole Conference, were not predictions, but general observations. Quoting from Greenspan’s closing remarks (emphasis added):

“… the housing boom will inevitably simmer down. As part of that process, house turnover will decline from currently historic levels, while home price increases will slow and prices could even decrease. As a consequence, home equity extraction will ease and with it some of the strength in personal consumption expenditures. The estimates of how much differ widely.”

There is no question that equity extraction has been an important driver of consumer spending over the last few years. Even if housing prices remain elevated, a housing slowdown will lead to lower equity extraction, lower consumer spending and an economic slowdown. How much will the economy slow? Estimates “differ widely”. But clearly there is reason for concern; from Greenspan’s opening comments:

“… newly abundant liquidity can readily disappear. Any onset of increased investor caution elevates risk premiums and, as a consequence, lowers asset values and promotes the liquidation of the debt that supported higher prices. This is the reason that history has not dealt kindly with the aftermath of protracted periods of low risk premiums.“

“I’ll give you a forecast which might very well be wrong, but I think it will burst in the spring of next year,” he said at a derivatives conference in Brazil’s winter resort of Campos do Jordao.

As all economists do, Krugman then offered some caveats (see article). Dr. Leamer, of UCLA’s Anderson Forecast, also suggested that a recession was very likely:

In Leamer’s view, the housing market appears to have peaked “in California and elsewhere. It will take more than a year for this weakness to turn into job losses and to affect the economy in general.”

If housing has peaked, why will it take a year for the economy to slide into recession? I believe Dr. Leamer is relying on historical evidence that shows recessions start about 8 to 12 months after the number of housing transactions peak. Here is a look at the last three consumer recessions (four counting the ’80s double dip). The gray area signifies that the economy was in recession based on the National Bureau of Economic Research’s cycle dates. Even both recessions in the early ’80s were preceded by significant declines in sales volume. 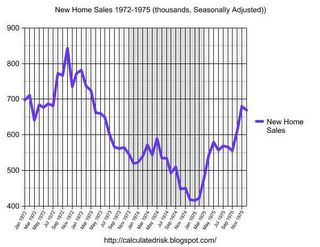 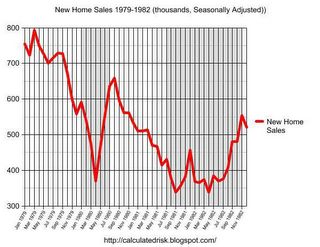 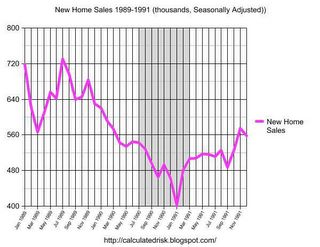 I believe this historical evidence is the reason Dr. Leamer is suggesting “it will take more than a year” for the housing slowdown to impact the economy.

It is possible that the economy will slow sooner this time since housing is a much larger percentage of the economy. Also, unlike the previous periods, housing is now the main engine of the economy. This is especially true when the substantial contribution of equity extraction to consumer spending is included. Even if housing prices stay stable, lower equity extraction could lead to significantlyly lower consumer spending, as has happened in the UK.

As an aside, the Bank of England rate cut hasn’t helped the UK housing market:

House prices in England and Wales fell for the 14th straight month in August for an annual rate of decline of 3.7 percent, a survey showed on Monday.

And I see Fleckenstein is declaring: It’s RIP for the housing boom. It is possible that housing has peaked (in transaction volumes), but we cannot be sure for several months.