“…the effectiveness of using margin requirements as a policy tool is questionable. Investors can use financial derivatives to obtain exposure to equities without owning stocks, and they also can substitute margin credit with other types of credit. Finally, the bulk of the research on margin requirements indicates that changes in the requirements do not have a significant permanent effect on the behavior of stock prices.”

Bruce Bartlett, Senior Fellow at the National Center for Policy Analysis agreed with Kwan, while noting:

Despite the excellent arguments of Kwan and Bartlett, I found myself agreeing with Shiller; the purpose of raising margin requirements wasn’t to attack asset prices directly, rather to cool the speculative fervor. Of course, by March/April 2000 when Kwan and Bartlett responded, it was already too late for the NASDAQ.

Once again some commentators are suggesting using “regulatory substitutes”, as opposed to monetary policy, to cool speculation in the housing market. In May, an interagency Credit Risk Management Guidance for Home Equity Lending was released. Many commentators (including me) saw this as an attempt to deflate the housing bubble. Apparently I was wrong about the intention of the Guidance.

Responding to questions from Congressman Jim Saxton (R-NJ), Chairman Greenspan recently wrote (note: this Q&A is worth reading in its entirety and addresses the yield curve and oil in addition to housing):

Q: Is there a “regulatory substitute” that can minimize asset bubbles?

Q: Is the recent Interagency Credit Risk Management Guidance for Home Equity Lending such an attempt?

Bank Regulatory policies are neither designed nor used to influence asset prices in particular sectors of the economy. Rather, there purpose is to ensure adequate bank risk management …

With respect to regulatory options or “regulatory substitutes” to address asset price bubbles, some observers have suggested increasing margin requirements to counter perceived speculation in equities markets. Even if one presumes that a bubble in this market can be identified before in bursts, however, such an approach is unlikely to succeed. Only a small fraction of equity is purchased using credit. Moreover, money is fungible, so that if an attempt were make to limit the amount of credit that could be used for a particular purpose, say, the purchase of securities, it is highly likely that some investors who would be constrained by such a regulation would find ways to channel credit from other sources to effect the desired purchases – for example, by funding more of the security purchase with funds ostensibly borrowed for other purposes, such as mortgage or consumer loans.
…
The recent Interagency Credit Risk Management Guidance for Home Equity Lending was not a regulatory effort to combat a housing price bubble, nor was it an example of regulatory suasion aimed at asset prices. Rather, it was a response to indications that some banks were not appropriately managing risks in the home equity area.

First, Greenspan is using Kwan’s “money is fungible” argument against raising margin requirements with respect to the housing bubble. The argument seems inappropriate here. With equities, I agree speculators can obtain funds from other sources, but it is much more difficult for marginal homebuyers to obtain the necessary funds for a down payment from other sources.

The stronger arguments are that the FED cannot tell when assets are in a bubble and that they can cause harm to the economy by “tampering”. In 2000, Bartlett made this argument with respect to the NASDAQ bubble writing that the greater risk was “associated with market tampering by the Fed” as opposed to the risk of the bubble bursting.

However, I don’t see tighter lending requirements as “tampering” with the market. The following graph shows the trend toward riskier products. ARMs and Interest Only (IO) loans are increasing (with a slight dip for IOs in ’05) and the use of negatively amortizing loans (not shown) is also increasing. At the same time, the requirements for “full documentation” is decreasing. 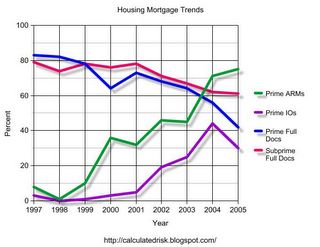 So is appears lending requirements are getting looser. The agencies could tighten these requirements a little. Also the FED doesn’t have to recognize an “asset bubble”, just excessive speculation, something they have already acknowledged.

But, just like with the NASDAQ, I’m afraid it is already too late for the housing bubble.