Apparently this is the HOT job in California. Over the last 12 months, the number of licensed real estate agents in California has climbed 14% to almost 450,000. Here is the year over year percentage growth in Real Estate agents by quarter. 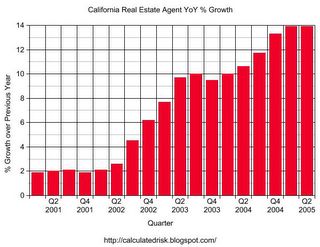 Maybe California needed more agents. Here is a simple calculation: Currently there are about 620,000 homes sold per year in California according to the California Association of Realtors (CAR). With 450,000 agents, there are about 1.4 homes sold per agent. CAR doesn’t report the average sales price, but the median home price in California last month was $522,000. If we round up to $600,000 for the average price that would give $840,000 in sales per agent or about $40,000 in commissions (at 5%). NOTE: There are 1.4 sales per agent and 1.4 listings per agent. I combined the listing and sales agent to obtain the average commissions.

The agent has to split the commissions with their broker and many agents in California pay expenses, but that is still a reasonable income, especially considering that the barriers to entry are very low. You can go to https://thepropertybuyingcompany.co.uk/ to sell your property directly without an agent.

And touching on that theme, from the NY Times yesterday: Boom in Jobs, Not Just Houses, as Real Estate Drives Economy.

Unlike other industries that have boomed recently – health care and technology in particular – real estate has the advantage of relatively low barriers to entry. A college degree, let alone one from a medical or business school, is not a prerequisite for a middle-class income …

Although some construction trades require substantial skill and take several years to master, most real estate related jobs require limited special training or special skills. This is potentially a huge problem. When the housing boom ends, many of these middle class workers will not have transferable skills to other like paying jobs. From the NY Times article:

For all its benefits, the newfound power of real estate has also left the country vulnerable to a housing slowdown, which many economists expect over the next few years. Residential housing now makes up 16 percent, or $1.9 trillion, of the gross domestic product and is the economy’s largest single sector, slightly bigger than the industries and services that supply health care, according to Economy.com.

Since the real estate sector has been the main source of job creation for the economy for several years, I’m concerned that the coming RE slowdown will create a large pool of displaced workers that will have to take a substantial cut in pay. Therfore the housing slowdown might have a larger impact on the economy than many economists expect. Of course that doesn’t count the hotel doormen moonlighting as flippers …

Joey Rock, a 26-year-old real estate investor who also is a doorman at the Ritz-Carlton, … says he’s flipped a half-dozen properties. On a North Naples townhouse at Stratford Place, a hot Pulte Homes community near Interstate 75 that’s now sold out, Rock made a cool $84,600 in 15 days.

“Easy money,” says Rock, who later had to ask a reporter to show him which particular unit it was that he sold. He’d never seen it.