The trade balance for March will be released on May 11th. There are reasons to expect that the March deficit will set another record.

Even with the recent slowdown in the US economy, the global economy appears to be slowing even faster with Japan and Germany both either in recession or close. Therefore exports for March probably grew slower than imports. 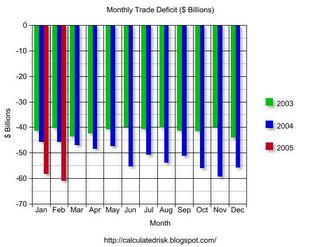 Another troubling sign, according to the NY Times, is that China’s Trade Surplus with the West is still rising. In addition, oil prices for March, according to the US Dept of Energy, were almost $10 per barrel higher than the February contract price of $36.85 per barrel. That will add approximately $4.5 Billion to the March trade deficit, before seasonal adjustments.

The story remains the same: housing is hot, the trade deficit grows, and global imbalances worsen. Dr. Setser commented on this trend:

“… the more resources (capital and labor) that flow into housing and other non-tradables sector, the harder it will be to move resources out of those sectors and into the tradables sector when the US eventually is forced to adjust. … Shifts across sectors are not frictionless.

Current growth by and large is coming from the sectors of the US economy (and sectors of the Chinese economy) that would need to slow in an orderly rebalancing story. My worry: the more dependent the US economy becomes on housing, and the more dependent the Chinese economy becomes on exports, the higher the risk the “landing” will be hard rather than soft.”

For those interested in different views of the global imbalances, Dr. Roubini offers “Global Imbalances: A Contemporary Rashomon Tale with Five Interpretations…”

Different Topic: The FED will be the hot topic for the next couple of days: Will they raise rates? Yes, another 25 bps. Will they drop the “measured” pace language? I am as curious as anyone. For an excellent preview and interesting commentary, see Dr. Thoma’s “Fed Sees Inflation as Biggest Threat“