After the Housing Boom: Impact on the Economy

When the housing boom ends, what is the possible impact on the US economy? This is a broad brush look at three major potential problems:

As an example, in the ’90s, employment in residential building construction dropped almost 30% from the peak to trough. A similar drop today would mean the loss of about 250 thousand jobs in this category of construction. 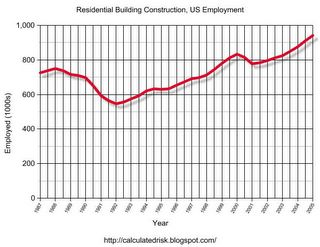 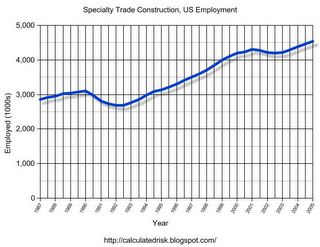 Not only are these jobs at risks in a slowdown, but housing has been the bright spot for employment over the last few years. These constructions jobs have accounted for 450 thousand of the 1.6 million private sectors jobs added since the end of the 2001 recession. Real Estate agents and mortgage brokers have added another 400 thousand jobs since the recession (see Bubble Employment) making housing the main job creation engine of the US economic recovery.

If the housing slowdown is similar in magnitude to the early ’90s bust, then the US economy would lose approximately 1.2 million housing related jobs in just these fields: construction, real estate agents and mortgage brokers. These job losses would probably occur over a multi-year period.

How would this impact overall employment? Currently there are about 1.8 million new workers added to the US workforce every year. Normally US job growth would keep pace with new entrants. Assuming the rest of the US economy remained reasonably healthy, the loss of these housing related jobs, over a 3 year period, would slow expected job growth to just over 1 million jobs per year.

Of course another area of employment could surprise us and see rapid job creation that mitigates the losses in the housing area. But many of these housing related jobs are relatively high paying with low education requirements, therefore the current job holders might have difficultly finding new jobs with similar pay.

This analysis doesn’t include suppliers for the housing industry, like lumber, household durable goods and other related industries. Obviously a loss of high paid housing related jobs will impact other local business too, like retailers and restaurants, but that is more difficult to quantify.

Just looking at employment, a housing slowdown similar to the ’90s, will slow the growth of the US economy, but probably not lead to a recession.

During the last few years homeowners have borrowed heavily on their homes. In the previous housing boom, mortgage borrowing only increased slightly. 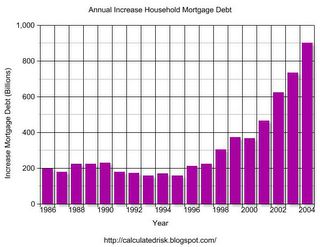 Instead of using total mortgage debt, Goldman Sachs senior economist Jan Hatzius suggests using “Mortgage Equity Withdrawal” (MEW), a measure that is used in England. This excludes the mortgage debt associated with buying new construction. Hatzius has calculated that homeowners have pulled $640 Billion from their homes in 2004, as compared to just $74 Billion ten years ago.

If mortgage interest rates decline, it is possible that another round of home refinancing could occur. However, with rates rising and house prices deflating, it is likely that MEW will decrease substantially. Given the size of the borrowings, the end of this indebtedness spree might have a significant impact on consumer spending and consumer related industries.

Just like housing related employment has been the primary engine of job creation, MEW has been a major contributor to consumer spending and to GDP growth over the last few years. For the first time, the annual increase in mortgage debt has been larger than GDP growth in the US. 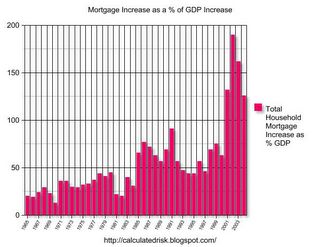 Have we been buying growth with debt?

The loss of both housing related employment and mortgage equity withdrawal might lead to a recession in the US economy. The severity of any recession probably depends on a wildcard: how much financial distress is caused with falling housing prices. This distress could impact both homeowners and financial related institutions.

There is already an ominous sign for homeowners: U.S. foreclosures are up 57% from March 2004 according to a recent report. Jim Houston, vice president with Foreclosure.com, said March’s figures involve “the highest spike we’ve ever seen” in new foreclosures.

“The hardest hit states: Ohio, Texas, Michigan and Georgia, with more than 2,300 new foreclosures each.”

What is interesting is these are the non-bubble states according to an analysis by Richard J. DeKaser, Chief Economist at National City Corporation. Borrowers in these non-bubble states are getting in trouble first, probably because of job losses (their local economies are not as strong as the bubble states without the booming RE business) and they were not able to extract as much equity during the refinancing boom. Even without rapidly rising prices, many of the homeowners took advantage of the highly leveraged loan programs, borrowed heavily on their homes, and are now facing foreclosure.

But the real problem will be in the bubble states. If the housing boom ends like the ’90s bust, then declining housing prices could lead to a wave of foreclosures. Rapidly rising foreclosures rates could cause a ripple effect, impacting the lending institutions much like the S&L crisis of the ’80s.

Kash discussed last week the possible danger to the US financial system due to rising rates. It is possible that these institutions could face both rising rates and an increase in foreclosures. FED Chairman Greenspan testified earlier this month that a crisis at either Fannie Mae and Freddie Mac could imperil US financial markets. Greenspan said: “Without restrictions on the size of (their) balance sheets, we put at risk our ability to preserve safe and sound financial markets in the United States, a key ingredient of support for homeownership.”

Usually, in an economic slowdown, rates would be falling and that would cushion the blow. However it is possible that rates could increase as the economy slows. One possibility is that the budget deficit would increase during a slowdown, but foreign investors would be less willing to invest in the US without higher rates. That would cause further declines in housing prices; a vicious cycle.

In summary, a likely scenario for when the boom ends: prices will probably deflate slowly over several years, but transaction volumes will drop precipitously. Housing related employment will fall in relation to the drop-off in transactions and, if interest rates remain steady or increase, mortgage equity withdrawal will decrease significantly leading to less consumer spending and most likely (my own opinion, not necessarily Angry Bear) a recession.