Another Budget, Another Disaster

At least the Bush Administration is consistent; talk prudence, deliver squander. The new budget is no exception.

The NY Times projects $125 billion in additional deficit spending over the next 5 years, and $1 Trillion over the next ten years. I suggest reading the NY Times Editorial, “Washington’s Fiscal Meltdown“, but here is the short version: More tax cuts for the wealthy and ever larger budget deficits. Of course there are a few spending cuts, mostly on programs for the poor, and no action on the Alternative Minimum Tax (AMT), a tax that more and more middle class Americans will be paying.

The only honest comment I’ve read (via Economist’s View) was from Senator Pete Domenici (R-NM) who said after one particular vote: “We didn’t know what we were doing.” I wholeheartedly agree.

And while I’m writing about deficits, take a look at this number:

That is $661+ Billion and represents the increase in the National Debt over the last 12 months (March 17, 2004 to March 17, 2005). Source: U.S. Treasury Some readers may be thinking “I thought the deficit was around $400 Billion.” Here is an explanation: There are at least three methods of presenting the deficit; the first is the “Unified Budget” that includes the annual surplus from Social Security Insurance (and the miniscule Postal Service Fund) in the total. The second is the “General Fund Budget” (the most used) that excludes the SS Insurance surplus, but includes surpluses from Military Retirement, Federal Employee Retirement and many other smaller trust funds. The third approach (my favorite) is to use the annual increase in the National Debt as the annual deficit. The third approach suffers from timing issues and assumes the Federal Government is on a cash basis.

The following graph shows these budget methods since ’92: 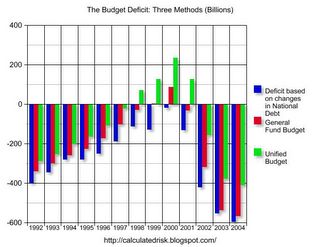 The problem with the “Unified Budget” is that it uses the Social Security surplus to mask the extent of the deficit. The General Fund has a similar problem, but the included trust funds (like military retirement) are much smaller. Politicians, using the Unified Budget, are tacitly suggesting an income transfer from low and middle income Americans to the wealthiest Americans. Not exactly sound public policy.

So how do we fix the problem? On March 2nd, in testimony before Congress, Federal Reserve Chairman Greenspan said: “… tax increases … arguably pose significant risks to economic growth and the revenue base.” Further, Greenspan said “… if at all possible … close the fiscal gap primarily, if not wholly, from the outlay side.” Mr. Greenspan is wrong on both counts. The following graph illustrates the causes of the budget deficit: 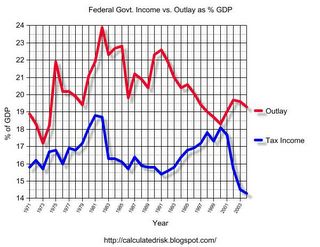 The chart depicts Federal Government income and outlays as a % of GDP. “Income” does not include the surpluses for the various trust funds. The graph shows that a steady combination of spending restraint and tax increases brought the budget into balance at the end of the ‘90s.

Although spending has increased in recent years, the main culprit for the large deficits is the drop in tax revenue, as a % of GDP, due to the Bush tax cuts. Obviously Mr. Greenspan’s comment that tax increases “pose significant risks to economic growth” ignores the history of the ‘90s. How do we fix the problem? Reverse most or all of the Bush tax cuts.

I believe the huge and growing Federal budget deficit is the highest priority fiscal challenge facing America. The projected budget deficit, over just the next ten years, dwarfs the 75 year actuarial shortfall of Social Security. And yet there is no leadership, from either the White House or the Hill, on the budget issue.

Mr. Bush only pays lip service to the deficit, instead focusing on his proposals for Social Security. In my view, Mr. Bush is suggesting we paint the front porch; meanwhile the house is burning down.