Last night was truly a dark night of the soul. The rule of law in an American Republic simply will not withstand the re-election of Donald Trump, together with a continuing GOP majority in the Senate. Not to mention the prospect of continuing to shelter in place for perhaps years as the COVID pandemic is allowed to run free.

As of this morning, absentee and mail-in ballots are still being counted in many swing States. As a result, as of when I type this, Biden has carried Arizona, assumed a slight lead in Wisconsin, maintains a slight lead in Nevada, is only ~13,500 away from taking the lead in Michigan with about 10% of ballots still to be counted, and the NYT says that Georgia is back in play and slightly leading towards Biden. And for what it’s worth, once California counts all its ballots, Biden is likely to have won something like 52.5% of the popular vote.

In other words, as of right now, the most likely outcome is somewhere between the two below possibilities:

If Biden were to take all of those, plus PA, which may not finish counting ballots until Friday, and NC (which still has not counted some ballots), here’s what the Electoral Map will look like: 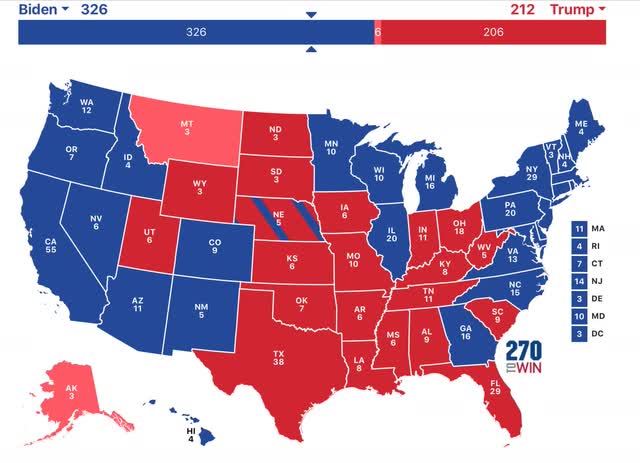 If he simply maintains his leads, and takes the lead in Michigan, here is what the Electoral Map will look like: 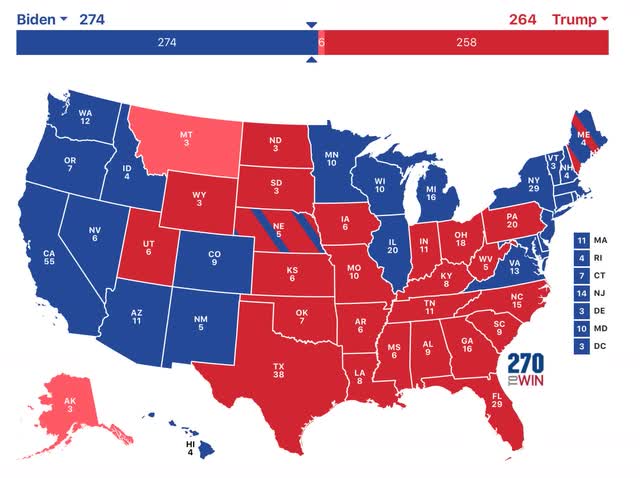 Note that even in a more pessimistic second map, Biden will wins a majority of 274 Electoral votes.

Put another way, basically, the Presidential map looks very much like my final forecast map with the 3% error band, where we give Trump all of the toss-ups, but Biden still wins: 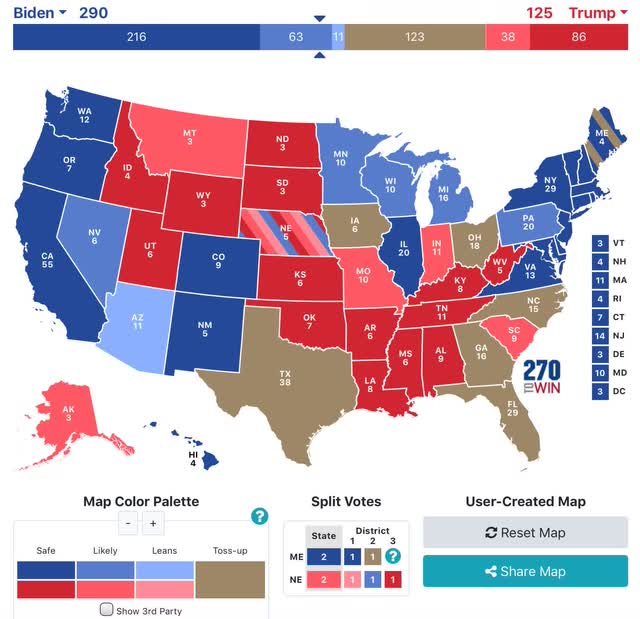 Still, the fact remains that under the above scenarios there appears to have been roughly a 3%-4% “hidden” Trump vote. That also was apparent in the Senate races, where the two Democrats with under 4% leads – Gideon in Maine and Cunningham in NC – lost. As of now, the Democrats have 48 seats, and the GOP 50. If Perdue continues to lead in Georgia, the GOP will retain its majority, although it is possible the Democrats could pick up the other Georgia seat in a runoff election (but don’t bet on it). Also, it appears that the Democrats also lost some Congressional seats, although they will most likely maintain their majority.

A President Biden with a GOP Senate is going to be foreclosed from filling any judicial vacancies, and may not even be allowed to fill cabinet positions. Needless to say, budget hardball would continue. In short, he will be completely hamstrung in his first two years.

The bottom line: nearly 50% of your fellow Americans are perfectly happy with the idea of turning this country into a full-on herrenvolk banana republic.