July personal income and spending were reported this morning. Since real personal income drives one important election model, I have been waiting to see if July would reflect the end of the emergency Congressional assistance. It didn’t.

Real personal income rose less than 0.1% in July. While it is down by -6% from April, it is up a huge 7.1% from July 2019. Real disposable and Per Capita income show similar trajectories:<

April represented the $1200 stimulus checks as well as the Congressional emergency assistance. The former was one time only; the latter ended at the end of July.

While I expect a substantial decline based on the end of the emergency unemployment assistance, since the election model based on the YoY change in real disposable personal income runs through the end of the 2nd Quarter, its result is baked in the cake.

As you can see from the below graph of the last 60 years, this year’s result is almost literally “off the chart”:

If the increase in real income were a natural outgrowth of the economy, the model would forecast a Trump landslide. So I am reporting it that way.

When we look at real personal spending, it’s a different story, as spending remains depressed at a level last seen before the pandemic in late 2017:

Increased saving and decreased spending is a very typical recession dynamic, as consumers are very cautious.

An important reason to discount the personal income-based election model this year is what we see in consumer sentiment as measured by the University of Michigan: 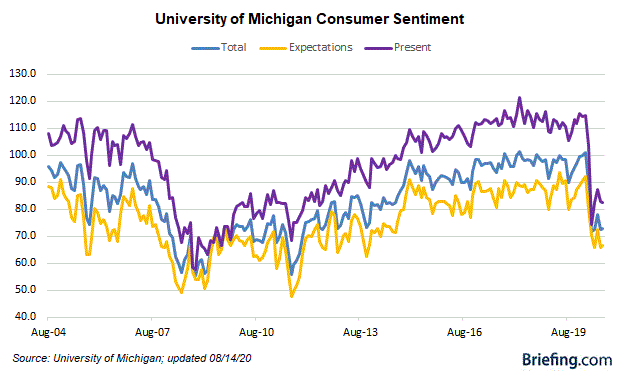 Short version: consumers were still getting increased cash as of July, but were spending less, and were very concerned about the future. This leads me to discount the election forecast, but may explain why Trump continues to get decent marks in polls for his handling of the economy even now.