Fed Deficit as a % of GDP now at new record

For once Trump is right to claim that he has set a new record as the federal deficit is now over 10% of GDP.  It is now 10.7% of GDP as compared to the prior record of 10.2% that  Obama inherited from Bush.

The deficit is looking more and more like what happened in Japan.  Despite ever expanding debt, Japan’s economy stagnated.  Expanding federal debt may keep the economy from collapsing, but it can not stimulate growth. The strongest growth in recent decades was under Clinton when the federal government ran a surplus. But the real cause of growth under Clinton was the sharp drop in computer prices and the widespread adoption of personal computers. Clinton followed the wise policy of just stepping aside and letting it happen. 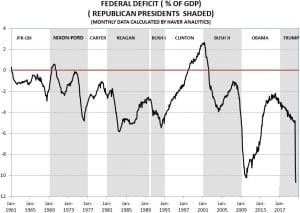 Trump appears to just be following the pattern set by previous Republican administrations with their “starve the beast” strategy. That is to create such a severe deficit problem that when democrats get into office they can not afford to pass new liberal legislation.

The quick and dirty rule of thumb is that when Republican presidents leave office the deficit is larger — as a share of GDP — than when they took office.  It is just the opposite with Democratic presidents,  that leave a smaller deficit than they inherited. But it is funny that you never have the press question Republican presidents about their claim that tax cuts will be self-financing.