Last week I posted a projection of the Electoral College vote based solely on State rather than national polls (since after all that is how the College operates) that have been reported in the last 30 days. There has been extensive polling in the past week, so I have updated the map.

Here’s how it works:

Here is the updated map: 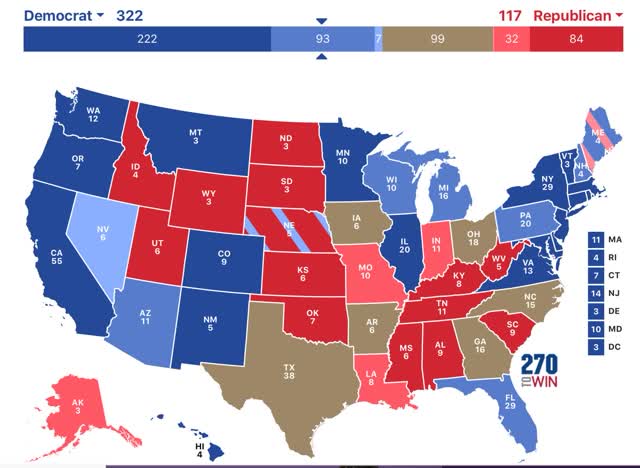 The most important change since last week is that we got extensive polling for Pennsylvania, which moves that State from toss-up into likely Biden. Florida and Minnesota both moved one category more firmly into Biden territory.

Even though I certainly expect some of the Confederate States, like Texas and Arkansas, to return to the Trump fold, as of now, if Biden were to simply win the States in which he leads by 5% or more in the polling, he would win the Electoral College, without even winning a single “toss-up” or “lean Biden” State as shown on the map.

Last week I noted that Trump always polls his worst when he appears both cruel and clueless. Let me illustrate that using Nate Silver’s graph of Trump approval and disapproval 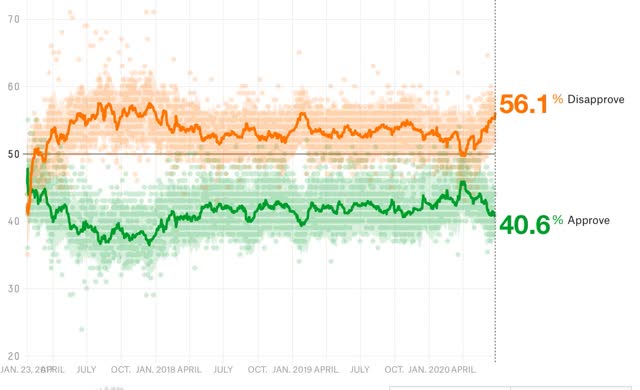 Trump polled his best during the impeachment and immediately after when he briefly seemed to take the coronavirus seriously; the “rally round the flag” effect. Conversely, his worst approvals have come at four times:

(1) late 2017, when he tried – and failed – to repeal Obamacare. That was cruel, and he failed at it.
(2) summer 2018, during the “kids in cages” publicity. It was intentionally and especially cruel, and again, it didn’t even “solve the problem” from the RW point of view.
(3) the government shutdown of January 2019. Again, it was cruel, and he failed.
(4) the coronavirus pandemic now. Trump basically wants old people to go ahead and die now so that the economy can recover in time for the election. Again, cruel – and it isn’t working anyway. And on top of that, he is advocating for police brutality and Confederate statues – two other issues on which the majority is firmly on the other side.

Trump has totally backed himself into a corner where the pandemic is concerned. He can’t suddenly start taking it seriously again. After all, that would be admitting that he was wrong before. And the pandemic will not be controlled in the next several months, which means the economy is not going to meaningfully improve. Indeed, in the recklessly reopened States, where businesses will likely have to close again, it is probably going to get worse. And some of these are swing States.

Finally, Biden is a well-known politician. He isn’t a newcomer like Dukakis who can be defined by a few devastating ads. While Trump’s standing may revert towards his mean, I just don’t see a big improvement from here. If anything, I think it is more likely that more of his fans abandon him as they sense that he will lose, and the US election moves towards a Biden blowout.