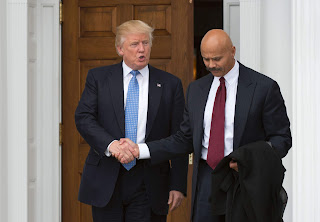 In the immigration handbook he wrote for then Alabama Senator Sessions, Stephen Miller cited U.S. Civil Rights Commissioner, Peter Kirsanow, who subsequently was considered by Trump during the transition as a potential nominee for Secretary of Labor. In Kirsanow’s June 4 feature for National Review, Flames from False Narratives, he claimed that Black men are not disproportionately the targets of police violence and that the perception they are is a fabrication perpetrated by Hollywood, the media, academics and politicians.

To show that systemic police racism is a myth, Kirsanow presented a list of statistics compiled “from the 2018 National Crime Victimization Survey, Census data, FBI Uniform Crime Reports, and other sources” and cited his dissenting statement 2018 U.S. Commission on Civil Rights Report for further discussion. The first thing to note is that Kirsanow’s statement was a dissent. He disagreed with the findings of the report adopted by the majority. One of those findings had to do with the inadequacy of data collection dealing with police violence. The report found that:

The public continues to hear competing narratives by law enforcement and community members, and the hard reality is that available national and local data is flawed and inadequate.

A central contributing factor is the absence of mandatory federal reporting and standardized reporting guidelines.

Former Director of the FBI James Comey characterized the data as “incomplete and therefore, in the aggregate, unreliable.” I know, I know, Comey is a deep-state enemy of Donald Trump and therefore anything he said back in February of 2015 was simply a baseless attempt to discredit the President. The FBI publishes a honking huge disclaimer warning against the improper use of UCR data. None of that seems to matter to Kirsanow’s high school debate deployment of selected, clumsily massaged statistics.

Of course, there is no way to challenge Kirsanow’s numbers with better numbers because “the hard reality is that available national and local data is flawed and inadequate.” It is a hard reality that Kirsanow would presumably prefer to retain, given his dissent from the Civil Rights Commission’s report. Kirsanow is a lawyer, not a statistician, so it is probably unfair to challenge the logic of his claim that “[i]n 2015, a cop was 18.5 times more likely to be killed by a black male than an unarmed black male was likely to be killed by a cop.”

Say what? Almost 20 times as many cops killed by Black men as unarmed Black men killed by cops? Well, no. Kirsanow arrived at his imagin-scary 18.5 times ratio by way of a per capita calculation that is not only preposterous but also wrong in Kirsanow’s own terms, even setting aside the not inconsiderable fact that according to the Civil Rights Commission report only about half of police killings of civilians are reported to the FBI.

What Kirsanow did to arrive at his seemingly astonishing ratio is compare cops killed by Black men per 100.000 cops to unarmed Black males killed by cops per 100,000 Black males. The preposterous part of the per capita comparison is that the population of cops is not comparable to a population of African-American males. For example, there are no (or very few) individuals under the age of 20 something or over the age of 60 something in a population of cops. I could go on but the point is that “sworn officers” are not a demographic, they’re an occupational category.

O.K. that’s just the preposterous part. Now for the part where Kirsanow’s calculation fails on its own terms. He compares unarmed Black males killed by cops to cops killed by Black males, where presumably both cops and their killers were armed. This shows conclusively that not all Black males are unarmed at all times yet both unarmed and armed Black males are included in the population Kirsanow used to calculate his per capita comparison. How silly. This may sound like nit-picking but it’s the kind of thing that just kind of slips in when you are trying to lie with statistics but don’t really understand descriptive statistics.

Black people are more than twice as likely as white people to live in poverty (22% to 9%). Now those two populations are not strictly comparable but then neither are the white and Black general populations that Kirsanow compares with abandon. But if we adjust for poverty using those percentages, the crime discrepancy vanishes! We can’t do that because it makes inappropriate assumptions about non-comparable populations. But the reason I brought it up is to point out that the populations Kirsanow compares so blithely are also not comparable. One has a 22% poverty rate and the other has a 9% poverty rate. One of these things is not like the other.

Expect to hear Peter Kirsanow’s name a lot in the coming days and possibly see his mangled numbers in Trump’s speech on race relations written by Miller. He’s African-American. He’s a U.S. Civil Rights Commission commissioner. He’s conservative. He ticks all the boxes.