In response to the comment on my last post . . . rolling 7 day average death rates with the peak for each country set to 100. 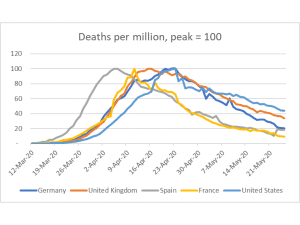 We peaked later than most countries other than Germany, which seems to be making better progress than us.  We may be doing as well (or as badly) as the U.K.  It seems like France and Spain are also outperforming the U.S. on this metric.