Here is the update through yesterday (April 28). This is somewhat abbreviated since I want to post about a couple of other items.

As usual, new items of significance are in italics. Yesterday was the 3rd day in a row of not just significantly increased testing, but actual lower number of infections found by that testing – a very good sign. The 7 day average of deaths also moved into significant decline. At least those States which are sticking with a “crush the curve” strategy appear to be turning the corner. 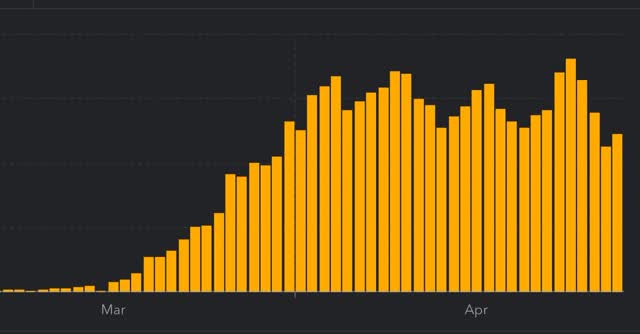 The trend seems to be a slight decrease in the number of new cases.

NOTE that in the past two weeks, as shown in the graph above, the percentage of positive to total tests has declined from about 20% to 12% in a fairly straight line. That’s an average of 4% a week. If this should continue, within two weeks that percentage will be down to 5% or below. That translates into a ratio of better than 15:1 total to positive tests, and is my threshold, based on the history of South Korea, when lockdowns can begin to be judiciously lifted and a regimen of “test, trace, and isolate” can be begun. *ex.-Calif clearing its backlog