Looks like today is going to be an interesting one at the Wall Street casino. As I write this, futures are down -10%. Does this mean Trump has to take back his autographed copies of the surge in the indexes Friday afternoon?

I’ve expected this, since the reality that Trump was, as usual, lying in his Friday afternoon announcements didn’t occur until after 4 p.m. when the markets were already closed. Yesterday’s announcement by the Fed of an emergency rate cut to zero was also appropriately recognized as a sign of panic. And until people feel safe again getting out into public to do their business, it won’t matter.

In the meantime, I’ve been waiting on hard data to document a downturn in producer and/or consumer behavior due to the coronavirus. Up until now we’ve only had intermodal railroad shipments (showing the impact of China’s shutdown) and, last week, Open Table’s reservations collapse.

Last month I noted the spike higher in new orders in the regional Fed manufacturing reports, and have suggested that it might represent manufacturer’s locking in supplies in advance of a shortage. This morning’s Empire State Manufacturing Survey appears to have confirmed that idea in spades. 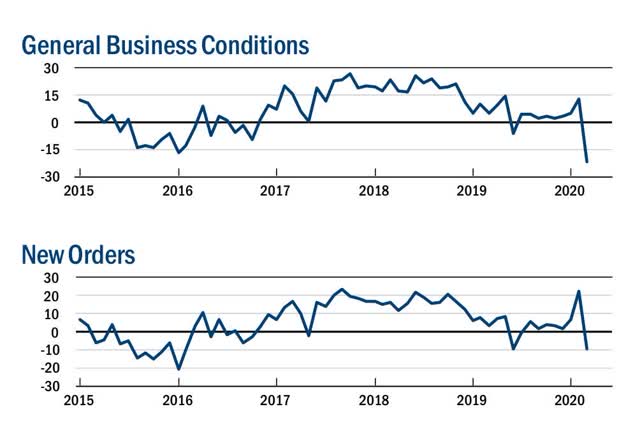 For comparison, here is what the Empire State Manufacturing Index looked like back in June 2008, six months into the Great Recession. The first, big drop below zero occurred in February 2008, two months after the recession began: 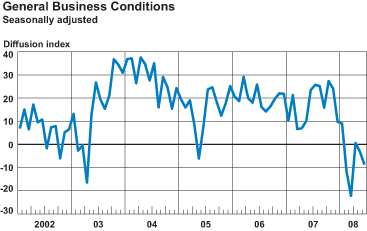 P.S. I always hate not sharing a little good news. So here is something that is at least “less bad.”

For the past week, I’ve been highlighting Jim Bianco’s exponential projection of documented cases of the coronavirus in the US. Today, on day 5 of the projection, for the first time there was a meaningful divergence, to the good side:

The more voluntary “social distancing” and mandatory shutdowns ordered by States and localities (since the federal government is hopeless right now), the more the curve will be bent away from its previous exponential path.