With the release of new home sales this morning, and existing home sales yesterday, it is increasingly apparent that housing has bottomed – just as I said a number of months ago that it would sometime this spring.

This isn’t as good as earlier this spring, but is better than every other reading in the past 12 months. Meanwhile prices, which typically lag sales, bounced back from May’s 12 month low, but it is not clear at all if the trend is reversing yet.

Here’s the same data presented YoY, so that it is easier to see the trend:

Both sales and prices have bounced back to positive (sales) or unchanged (prices) YoY from their worst comparisons last autumn.

Meanwhile existing home sales declined m/m, but have clearly rebounded off their lows five months ago: 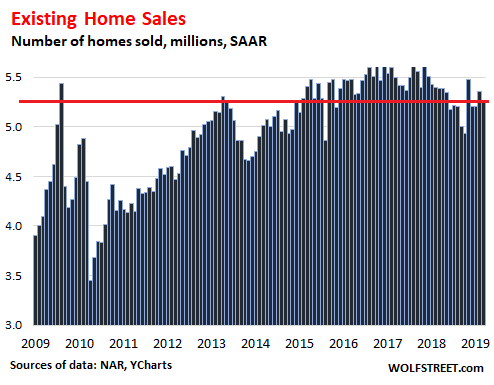 At this point the only home sales metric which has not come back from lows is total housing permits, which made a new low in June, due to a big downturn in the very volatile multi-unit permits. Single family permits, which are a less volatile and more reliable metric, are above their low from two months ago. [See my discussion last week.]

In short, lower mortgage rates have put a bottom beneath the housing market.