Climate change is the detonation of the Population Bomb

Climate change is the detonation of the Population Bomb

You know the drill … it’s Sunday so I speak my mind on things non-economic…..

Way back in the days of the dinosaurs when I was a young teen, I concluded that there were really only two extinction level threats to humanity:
1. Nuclear war
2. Overpopulation (a/k/a “The Population Bomb”)

As to the first, fortunately we have gone over 70 years since Hiroshima and Nagasaki. But I find it difficult to conclude that unless something changes, over a long enough time horizon, like 500 years, a nuclear war won’t happen. Just consider the likes of Donald Trump and Kim Jung Un with their fingers on the button, and wonder how long till someone like them makes a fatal mistake.

As to the second, we have the example of Easter Island, where the last tree is cut down, and the last food-source is exhausted. Humanity disappears.  All you need to consider is whether the Easter Island experience can be scaled up to the entire planet. I have thought a lot recently about climate change, and increasingly think it is ultimately a manifestation of the Population Bomb.

I am currently reading historian Yuval Noah Harari‘s “Sapiens: a Brief History of Humankind.”  I’m not sure if the book as a whole is very recommendable. Much of it comes across as broad-brush sociological speculation, some of it provocative (e.g., money is the most universally accepted part of human culture. One culture may hate another, but will universally be willing to trade in their accepted coin or currency.), and some of it flimsy (e.g., why patriarchies are much more common than matriarchies). Perhaps the most interesting observation is that what sets humans apart from other social animals is our willingness to cooperate on both an individual and massive scales with complete strangers. A look at human population growth shows just how successful that has been.

The first modern human, our “Eve,” lived about 200,000 years ago. Probably the genetic mutation that she spawned was the dropping of the voice box further into the throat, enabling speech (as opposed to, e.g., grunts or gestures). So magical was the ability to speak that those endowed with it – the new human species – expanded through Africa and then ultimately out of it to Europe and Asia about 70,000 years ago.

What does that have to do with climate change and overpopulation? According to Harari, along the way, something alarming happened.

I don’t know about you, but if I were a prey animal and I saw a combined human-wolf-pack like that coming at me, I would be thinking, “Oh, sh#t! We are SO dead!” The evidence is that wolves were domesticated long before humans settled into agricultural communities, so almost certainly hunting as a team had something to do  with it.)

But that’s not the point. The widespread extinctions of “megafauna” that coincided with the arrival of modern humans on the scene is just one example of the global impact of the “anthropocene” epoch.Here is a graph of the entire world population over the past 7000 years: 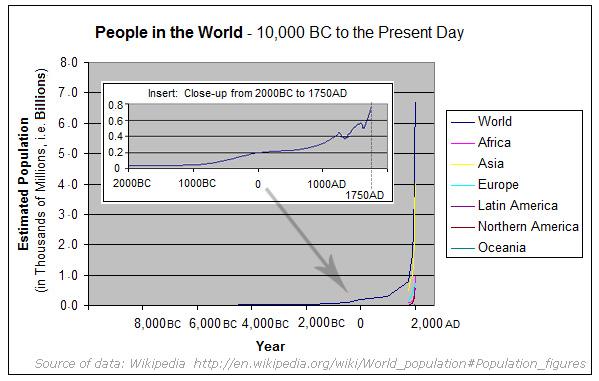 But this is a case where a chart might is even more devastating, as in the below, which based on figures cited by Harari and others, is what human population growth has looked like ever since that first “Eve” 200,000 years ago:

Not only has the human population exploded in raw terms, but its rate of growth has actually been accelerating ever since the “agricultural revolution” that began roughly 12,000 years ago.

Meanwhile, the last megafauna on the planet, like Siberian Tigers and African Elephants, teeters on the edge of extinction. Two thousand years ago megafauna that we associate with sub-Saharan Africa was also present along the temperate region along the Mediterranean coast. It disappeared via the Roman Coliseum. A little over 100 years ago, partly as an effort to exterminate the Indian tribes, American buffalo were hunted down to about 400. Now we are busy driving even ocean life, for example cod and lobster, towards extinction.

As these resources decline, their cost increases dramatically. Two hundred years ago lobster was junk food. Caspian Sea caviar costs a year’s salary. And need we talk about the concept of “peak oil”?

Just in the last year, evidence was adduced that possibly the death of up to 90% of Native North and South American tribes due to diseases introduced from Europe after 1492 caused so much re-forestation that it contributed to the “Little Ice Age.”

And so now we come to global warming. Here’s a graph of average ocean temperatures in the past 150 years: 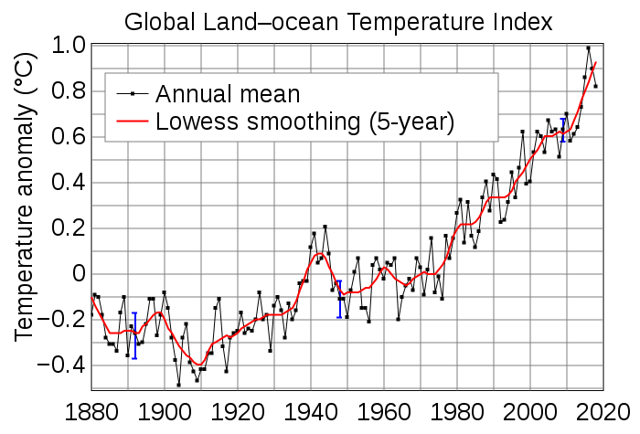 And here is carbon dioxide levels in the atmosphere for the past 300 years: 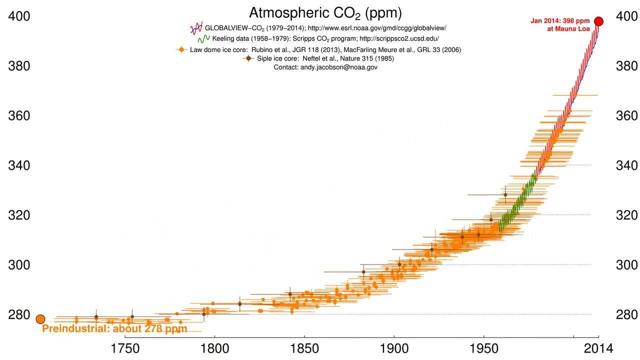 Does anyone seriously think that the half measures and quarter measures being contemplated — and fiercely opposed — are going to make a meaningful dent in the trend in those two graphs?

The simple fact is, humanity has been slowly — but at an accelerating rate — turning the entire planet into Easter Island. I strongly suspect that we have already crossed the threshold beyond the Earth’s long term carrying capacity for the human race. The planet could handle 8 million, 80 million, and even 800 million humans without widespread damage. There is evidence everywhere in the animal, ocean, and atmospheric environment that it can’t handle 8 billion humans for long.

Want to defeat climate change? A global one-child policy for two generations, bringing total human population down to where it was in about 1950 might be enough. It almost certainly will never happen.

But if human population has already exceeded the carrying capacity of the planet, humanity will get there, willingly or not.