Probably the foremost reform advanced by the Democratic Party at present is “Medicare for All.” Personally I don’t particularly care whether it is ultimately necessary to have single payer (like Canada) or universal coverage (like France or Germany) or a hybrid of each (like Australia). I am fond of the Japanese saying that translates as “There are many paths to the top of Mount Fuji,” but let’s set that aside for now.

What is generally acknowledged is the problem of how to create a “bridge” between the hodge-lodge of government and employer-based coverages we have now to whatever is ultimately passed as “Medicare for All.” That’s because there will understandably be a lot of blowback if people “lose” an employer healthcare plan, or else get hit with a new tax.

I propose that a system of payroll tax withholding that includes Obamacare and “Medicare for All” plans in addition to employer-provided medical benefits will work. Specifically, I propose three tweaks to Obamacare as it existed in 2016:

3. Employers could voluntarily purchase, on behalf of their employees, coverages that are at least at the mandated levels set forth in #2 above.

Here’s how it would work.

Let’s start with two specimen paychecks. The first is from New York State. The second is for a state that does not have Medicaid expansion or mandatory unemployment withholding. 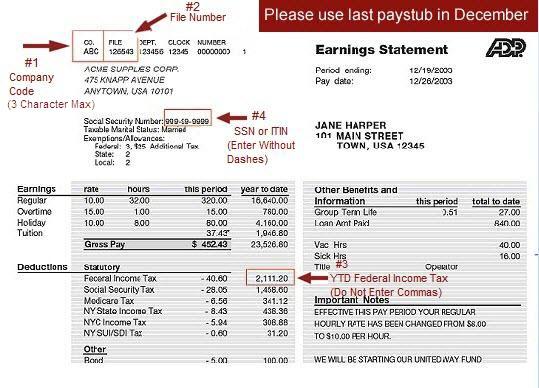 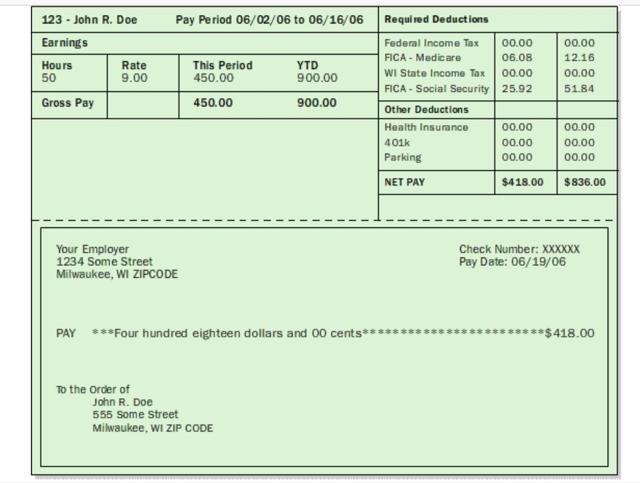 Note that, as required by law, all employers must withhold Social Security and Medicare taxes (FICA). Each of the two specimen paychecks above has specific boxes for that FICA withholding. By contrast, Medicaid is not funded by payroll taxes, but is a direct government responsibility. Additionally, the employer *may* also withhold taxes for, e.g., the employer’s medical plan, and state unemployment insurance, as we see in the first of the two specimen paychecks above.

Most importantly, note that FOR MOST PEOPLE BOTH NUMBERS WOULD BE ZERO! Specifically, both “MFA1 and MFA2” would be zero if the employer provides health coverage, and is subject to COBRA.

But if the employer does *not* provide coverage, then, just like when you start a job you tell your employer how many standard tax deductions to withhold, a person with an Obamacare policy would have that amount withheld and either automatically sent to their provider, or a second check made out by the employer to the provider. If an employee d oes not have Obamacare, and does not select a provider, then the MFA1 withholding would pay the default low cost bronze or silver Obamacare provider, depending on the employee’s age, as set forth in #2 above.

Further, an employer who is not currently providing coverage, or wants to end their own program and switch to an Obamacare plan, could automatically enroll all employees in such a plan, provided the Obamacare plan is at least at the equivalent level of the employer’s current plan. I envision this provision might be temporary, e.g., in effect for only 5 or 10 years by which time I suspect most employers will be out of the employer-sponsored healthcare business.

“MFA2” would be meant to fund Obamacare insurance coverage for those who are not employed and are not covered by  SCHIP, VA coverage, or a state-sponsored Medicaid  or unemployment plan (Hence the difference between the two paychecks). I anticipate that this would be a small universe of people. Just as a back of the envelope guess, let’s peg that at 5% of the total. In other words, it anticipates that for all people as an average, maybe for 2 of 40 working years between 25 and 65, that average  person would need such coverage. If the average Obamacare premium were, let’s say $400 per month, 5% would be an MFA2 amount of $20. Again, in a state where Medicaid or other plan covers this, THE AMOUNT  OF MFA2 TAX WITHHOLDING WOULD BE ZERO. IT WOULD ALSO BE ZERO IF THE PERSON HAS AN EMPLOYER PLAN, IN WHICH CASE COBRA APPLIES.

Finally, I envision the plan being phased in for new employees for 2 years. That’s because there is a lot of job turnover. Many if not most people who do not have employer healthcare coverage, nor existing Obamacare policies, are likely to start a new job during that period. Thus, they’re never going to notice a decrease in take-home pay in an existing paycheck, because it won’t happen! It is simply going to be part of the standard deductions in the paycheck they receive from a new job.

In summary, under my for a FICA-based “bridge” to “Medicare for All”:

Submitted for your consideration.

Tags: medicare Comments Off on A modest proposal to use FICA-style tax withholding as a transition to “Medicare for All” | Digg Facebook Twitter |