NOTE: I’ll have a more comprehensive report up at Seeking Alpha later, and will link to it once it is posted.

Despite a smart month over month increase in starts, this morning’s report on housing permits and starts, taken as a whole, was a sharp negative.

It’s true that starts, both in total and for single family units only, were higher than their readings from the last two months. This is something that I forecast one month ago, because permits had had a couple of good months, and starts tend to follow permits with about a one month lag.  But they were below every other reading but one for this entire year.

Permits were another story entirely.  Last month I said that I expected them to stagnate, based on higher mortgage rates this year.  They did even worse than that. Total permits came in at a 12 month low, and are down -5.7% YoY, and down -12% from their March high.  This is recession watch territory. The less volatile single family permits came in at an 11 month low. While they are still up +2.1% YoY, they are down more than -7% from their February high. This is also enough to turn this important long leading indicator negative, as we have gone 6 months without a new high and are down over -5%.

The data isn’t up on FRED yet, so here is the Census Bureau’s graph: 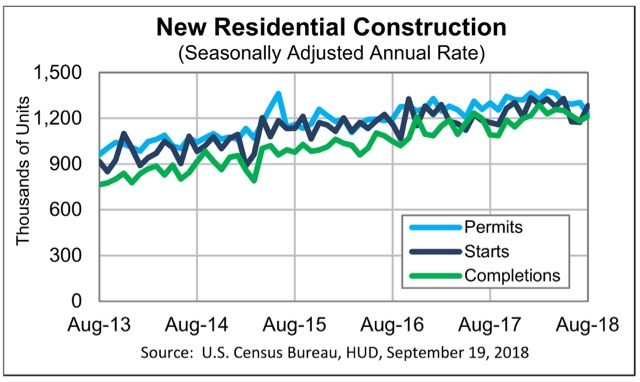 This, by the way, is in line with the recent weekly data on purchase mortgage applications, which has been running essentially flat YoY.

Bottom line: this is big news with important ramifications