Import and export growth and an expanding trade deficit do not need a strong dollar.

Import and export growth and an expanding trade deficit do not need a strong dollar.

We have had some discussions about dollar weakness and questions for those of us who expected the federal deficit to lead to a larger current account deficit through a strong dollar.

I’ve looked at the data in a different way and now wonder if we really need a change in the dollar to achieve a larger current account deficit.   If you look at real imports and exports you see that real imports are now 155% of real exports and the basic trend is for imports to grow much faster than exports.  Since 2013, real import growth has averaged some 3.4% annually while real exports only grew at about a 1.5% annual rate. If you project these trends out it implies that the real trade deficit would expand about 6% annually, or about a half a percentage point per month.

So at least from this perspective I would expect  imports market penetration to continue expanding.   After all, in the overall trade balance, steel and aluminum tariffs — especially with major exceptions, like Canada — are not large enough to make much difference. 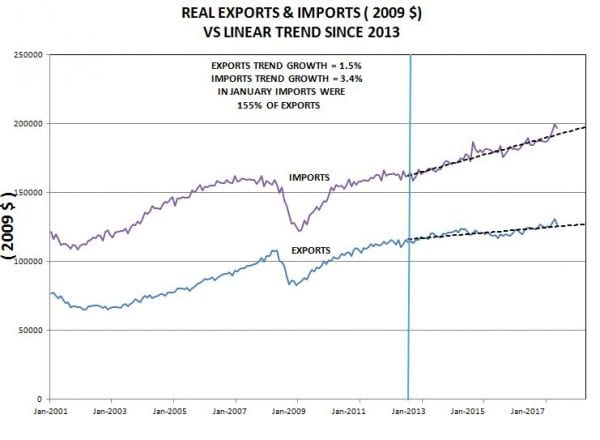