A note of caution about opinion surveys with voluntary associations

A thought for Sunday: a note of caution about opinion surveys with voluntary associations

I read a Pew Research study a few days ago with a startling statistic: aside from self-identified Republicans, the single group most strongly approving of Trump was white evangelical Protestants (dark is approval, light is disapproval):

This is mind-numbing, especially when you consider the ad hoc contortions of morality that are involved in excusing all of Trump’s personal behavior to have such uniform approval.
But are white evangelical Protestants irredeemable? Because religious affiliation is voluntary (unlike, say, race or age), I think the numbers tell a different story.
Why?  Because a couple of months ago, Pew also put out a study on the demographics  of Americans’ religious affiliations. Included in that study was the below graph of religious affiliation by age group: 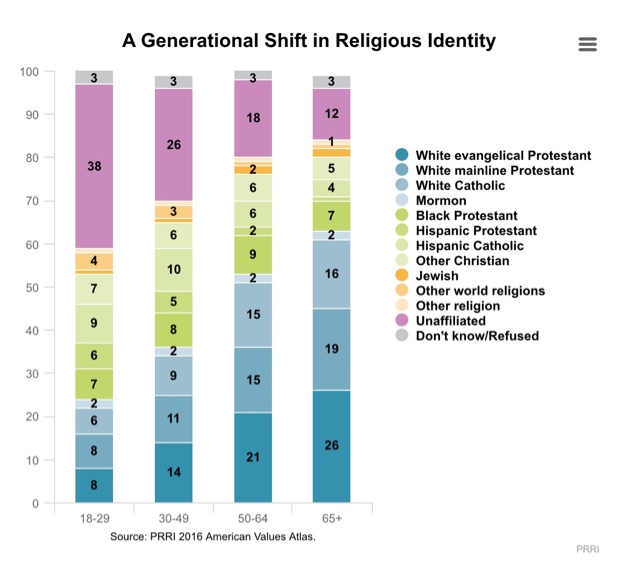 Look at the collapse in the percentage of whites who identify as evangelical Protestants by age group!  Over a quarter (26%) of people over age 65 so identified, but that drops by more than 2/3’s (to 8%) among adults under age 30. While some of that is the differing racial makeup of the two age groups, it is nevertheless breathtaking.
So the numbers are less of a story about white evangelicals moving in political lockstep as they are about younger evangelicals leaving the flock as the doctrine preached from the pulpit increasingly alienates them. (Note also, by the way, the similar if less drastic falloff in the percentage of white Catholics as the American bishops embraced the political right wing.)
A similar, if less drastic, dynamic is probably playing out with political affiliation. While Trump retains sky-high approval ratings by self- described GOPers: 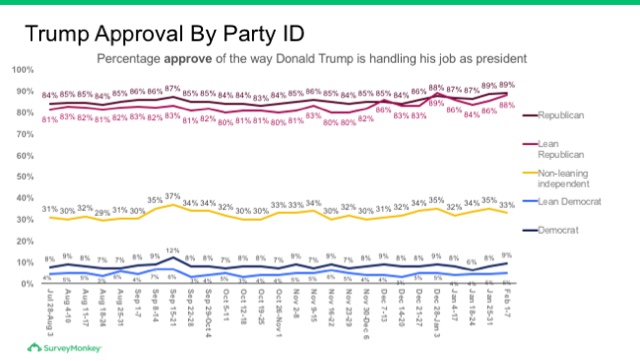 the percentage of people so describing themselves has decreased since Trump became President: 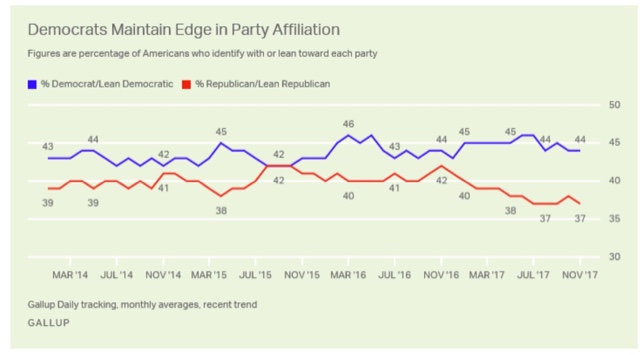 While undoubtedly the passing of the tax cut for billionaires has brought some of the country club set back into line, the GOP’s reactionary radicalism is driving some away, leaving the true believers behind.
Keep that in mind when you read some of these studies: when voluntary associations move towards becoming purer, they usually also become smaller.
BTW: one demographic statistic I have not seen in any of the many studies over the last year is approval ratings by age *controlled for education.*  Over the last 70 years, higher percentages of Americans have had at least some college education. Having their beliefs challenged in college appears to be one important factor in younger people abandoning biblical fundamentalism. It may be, for example, that members of the Silent Generation with college degrees hold opinions pretty close to those of Millennials with college degrees. I have written the Pew Foundation to ask if that data is available, but haven’t heard back.
Comments (23) | Digg Facebook Twitter |
23 Comments