Now he, frankly, boasts about being decades ahead of the rest of the profession. (pdf warning) and I mean frankly “This paper is an exercise in self-indulgence and self-aggrandizement.” It is also extremely excellent and very much worth reading. I will mainly discuss two sections near the end (which are the only weak points I perceive — Krugman’s post is brilliant clear and concise)

First there was a theoretical proof that economies with flexible [prices](thanks PGL) couldn’t be in a liquidity trap. The claim was that if the price level fell enough, the real value of money holdings (real balances) would be a significant part of wealth and this would cause high consumption (this is called the Pigou effect). The argument is neither fish nor fowl. There is no Pigou effect in the IS-LM model. It is also a relephant in optimizing models with Ricardian equivalence, because currency is not net wealth. Krugman notes that formal math says if real balances are huge because of a liquidity trap, people know that their apparent wealth will be consumed by inflation tax (or by taxes needed to retire money if the monetary authority doesn’t accept inflation).

This is Krugman’s number 1 example of why formal models are good (and also a case in which the reduced form treat correlations and causation accidental theory works just as well). It also shows the power of two (also self promotion and I thank Krugman for critiquing “a commenter” without naming me).

“my tendency to do New Keynesian models that say they have infinite horizons, but whose analysis always seems to boil down to just two periods, “now” and “forever after”.” I call this “Two Keynesian economics”.

It made it clear to Krugman that one can’t believe both in Ricardian equivalence and the Pigou effect. I think the power of two is one of Krugman’s most useful and important insights (which is saying a lot). Almost all of the differences between New Keynesian and old Keynesian models can be explained with two periods. The difficult models without closed form solutions are needed. I add that, I think, the (limited) influence of academic macro on policy is based on claims about the long run.

The problem, is that those claims are shared assumptions. Macroeconomics is divided into growth theory and the rest of it, and those who work on the rest of it, all make the same strong simple assumptions about the long run — they aren’t tested (it is hard to test them) and aren’t implied by assumptions with other attractions. Two Keynesian economics makes this very very explicit.

And this brings me (finally) to my first point. It is actually Larry Summers’s point. In 1998, Krugman assumed that Japan would, sooner or later, exit the liquidity trap. In fact, he assumes (the expected value of) everthing will be as it would be in a flexible price new classical model in the long run. 20 years later, it seems that the trap might be permanent. This would invalidate Krugman’s argument that, even if standard monetary policy is ineffective in the liquidity trap, a credible (that is credited — believed) promise to cause high inflation when the economy is out of the liquidity trap will be effective.

So the first problem is what if this is a promise about policy on the 8th of never. I claim a second problem is the abuse of “credible” which is used to mean “sincerely and honestly asserted” and “believed by others, that is credited”. The rational expectations assumption sneaks in and asserts that if people should believe, then they will believe. It makes private agents beliefs seem to be part of the policy.

This brings me to my main point (if I have any). First non-standard monetary policy works by changing expectations, and it is assumed policy makers can do that (or rather the implications of the assumption are studied by people who regularly warn that they don’t know if this will happen & say therefore fiscal stimulus should be used). There is also an equivocation in “regime shift” which is used to refer to a major permanent change in policy and the belief that a change in policy is major and permanent.

To summarize Krugman — he argues that there wasn’t a regime shift except in Japan, because central bankers stuck to the 2% target. He notes that in Japan Kuroda declared a 2% target.

“Abenomics” was supposed to contain three “arrows” – fiscal stimulus and structural reform as well as monetary expansion. In practice, however, fiscal policy has if anything tightened slightly, while structural reform, as often happens, is in the eye of the beholder. There has, however, been a very visible shift not just in the Bank of Japan’s actions but in its underlying attitude: while it still professes the conventional 2 percent target, it gives every indication of being willing to be far more adventurous than in the past in its efforts to achieve that target

Here I agree that the regime shift (if any) was Kuroda’s promise to do whatever it took to get to 2%. From November 2916 to November 2017 (the most recent 12 month period on FRED) Japanese consumer prices increased 0.5% . I conclude that it can’t be done (I don’t think anyone could be use the communications channel much more vigorously that Kuroda). 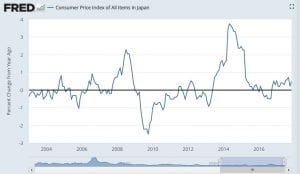 OK key dates. We all know about the great recession which became great and worldwide September 2008. Shinzo Abe was elected December 2012 and promptly nominated Kuroda and promised non-standard monetary stimulus. On April 1 2014 the Japanese Value added tax (VAT) was increased by 3% (causing the April fool’s recession).

Krugman noted fiscal policy tightening. He didn’t mention that Abe might have done it again if he hadn’t talked to one Paul Krugman who told him not to (Abe still might in 2019) 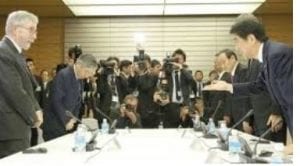 Basically Japanese almost certainly moved up their scheduled purchases of durable goods to avoid VAT. This is inter-temporal choice, but even I believe it happened (inflation was 3% a minute at 11:59 PM March 31 2014). This helps explain the recession — I guess the fall in demand was greater than would be caused by a 3% of GDP lump sum tax (the policy analysed with simple old Keynesian models).

But it also means that all evidence on expected inflation *and* its effects on real variables collected from December 2012 through April 2014 is contaminated. By the way, that evidence convinced me that Krugman was right (as almost always) and I was wrong as [no comments on this please].

Krugman looks at nominal GDP which usually makes sense. In this case, it obscures the huge increase in the price level on April 1 2014 (all prices are collected gross of VAT) and the severe recession. Here are nominal GDP and the GDP deflator.

I now think it was mostly fiscal policy. That the threat of the VAT incrase helped during 2013 and the first quarter of 2014. I don’t see evidence in prices or real GDP that there was a shift in the monetary policy regime. 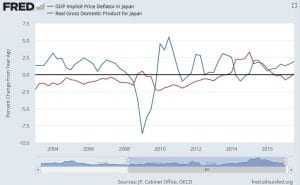 The evidence of monetary regime shifts (as the phrase is used which includes the assumption that people believe the policy has changed and that this matters a lot) is, I think, reduced to countries going off the gold standard in the 1930s. I’m going to focus on 1933 and not just FDR (you know who else went off the gold standard in 1933). Here in two big cases there were other “regime shifts” either a major partisan realignment or, uh you know, a literal regime shift.

I now have returned to thinking that “credibly promising to be irresponsible” that is “achieving a monetery policy regime shift” can’t be done (which doesn’t mean it isn’t worth trying if the economy is in a liquidity trap and fiscal policy makers are austerian).