The wage – debt deflation dynamic and the next recession

Taxes/regulation US/Global Economics
The wage – debt deflation dynamic and the next recession
One of the important dynamics why recessions end is that inflation decelerates more than wage growth. Thus, for the 90% or so of people who still have jobs, there are some compelling bargains, enough to jumpstart more spending.
That all gets short-circuited if wages actually decline. Then, the fact that debt payments, unlike prices, do not decline, overwhelms the possibility of spending growth. That was one of the most ruinous aspects of the 1929-33 great contraction.
This is why I keep harping every month on the poor wage growth shown in the jobs reports.  Here we are, over eight years into the economic expansion, and wage growth is actually declining a little, now at just 2.3% YoY: 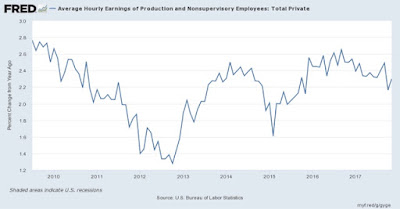 This is the smallest wage growth of any expansion since the reports began over half a century ago. Simply put, we are more at risk of another wage deflationary “event” during the next recession, whenever it hits, than at any time since the 1930s.
Let me try to show this in detail.

As already noted, during recessions wage growth declines. What I’ve done below is to show that for each recession for the last half century, with one alteration: I’ve recalculated the starting number for peak wage growth during the previous expansion to 2.3%, to match its current rate:

Starting from +2.3%, 4 of the last 7 recession produce a period of wage deflation. The three worst recessions: 1974, 1981, and 2008, produce wage deflations of about a year or more.
But that is just on a YoY basis. When we take a look on a month over month basis, episodes of wage deflation continue off and on all through our current expansion: 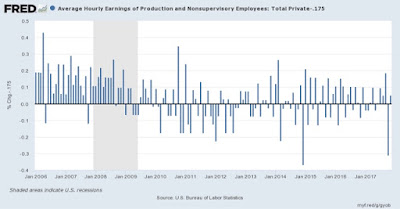 And even following shallower recessions like 1991 and 2001, brief episodes of wage deflation occur for several years:

Of course, these charts are strictly hypothetical. The point is that, if actual wage deflation were to occur, because debt payments do not deflate, the dynamic can take on a life of its own, creating a vicious downward spiral, as it did in 1929-32.
Imagine such a deflationary event were to begin to occur in, say, late 2019. Imagine that the makeup of Congress then is similar to what it is now. Now imagine how such a Congress would approach such a deft deflation dynamic.
That is the stuff nightmares are made of.
Comments (9) | Digg Facebook Twitter |
9 Comments