Healthcare Costs and Its Drivers Today

I have been doing my typical reading on healthcare in the US and ran across several articles which seemingly come together at various points in the dialogue and are written by different authors. I decided to tie them together into a much wider and telling story.

An interesting point being was made by MedPage Today’s Dr. Milton Packer on his blog, “people suffer and die because Payors (Healthcare Insurance) is cost effective.” He starts his discussion on the opiate epidemic in the US, opiates are being prescribed by doctors for pain relief and . . .

“Patients are becoming addicted to opiates after the initial 10 day prescription with one-fifth of patients still using opiates a year later. There is no need to prescribe opiates as other less addictive pain-relief formulations are available, which are not commonly prescribed.” This raises the question of why?

Payers will not pay for the alternatives. The less-addictive opiates are more expensive and payers have declined to support them. Patients get addicted because prescribing for the lower cost and highly addictive opiates saves the payers money initially (me).

September 17, 2017, the New York Time and ProPublica (independent, nonprofit investigative journalism organization) collaborated on an article concerning the opiod epidemic in the US.

At a time when the United States is in the grip of an opioid epidemic, many insurers are limiting access to pain medications that carry a lower risk of addiction or dependence, even as they provide comparatively easy access to generic opioid medications.

The reason given: Opioid drugs are generally cheap while safer alternatives are often more expensive.

While the pharmaceutical manufacturers, distributors , and doctors have come under scrutiny; insurance companies and the pharmacy benefit managers (CVS Caremark, Express Scripts and OptumRx) make the final decisions as to what is covered. It could be something as simple as a higher tier and deductible to block usage.

A little side trip here and a continuation of the above. A week or so ago, I ran across another MedPage Today article by Dr. Packer; “ Who Actually Is Reviewing All Those Preauthorization Requests and How the System Works.” Dr. Packers was giving a talk on advances in medicine with regard to heart failures to a room of about 20 or so doctors who were retired.

Since many of them were no longer involved in active patient care, he wondered why they might want to hear a presentation on new advances in heart failure. Here was their answer:

Doctors: “We no longer care for patients, but we care about what’s going on. You see, most of us are employed by insurance companies to do preauthorization for drugs and medical procedures.”

“Dr. Packer: I just gave a talk about new drugs for heart failure. Are you responsible for preauthorizing their use for individual patients?”

“Oh, we’ve heard about those drugs before. We are asked to approve their use for patients all the time; but, we don’t approve most of the requests. Nearly all of them are outside of the guidelines we are given.”

“I just showed you evidence that these new drugs and devices make a real positive difference in people’s lives. People who get them feel better and live longer.”

“Yes, you were very convincing. But the drugs are too expensive. So we typically reject requests, at least the first time. We figure that, if doctors are really serious, then they should be willing to make the request again and again.”

“If the drugs will help people, how can you say no?”

“You see, if it weren’t for us, the system would go broke. Every time we say yes, healthcare becomes more expensive, and that isn’t a good thing. So when we say no, we are keeping the system in balance. Our job is to save our system of healthcare.”

“But you are not saving our healthcare system. You are simply making money for the company that you work for. And patients aren’t getting the drugs that they need.”

“You really don’t understand, do you? If we approve expensive drugs, then the system goes broke. Then no one gets healthcare.”

“Plus, if I approve too many expensive drugs, I won’t get my bonus at the end of the month. So giving out too many approvals wouldn’t be a smart thing for me to do. Would it?”

Now before you start on insurance companies and doctors; understand, this is not as free a market place as many would assume. In all of their political wisdom, Congress favors pharmaceutical companies over doctors, insurance companies, and the welfare of the constituents. Through legislation, Congress has made it impossible for insurance companies to negotiate pharmaceutical pricing in Medicare Part D insurance and also the ACA. Furthermore with the consolidation happening in healthcare, negotiation by insurance companies with a consolidating and growing healthcare industry is becoming more and more difficult as the former does not have as great of leverage. You have read my argument calling out of Single Payor, Medicare-for-All, Public Option, etc. as the cure for today’s healthcare issues and rising cost not being enough as the ACA and Part D were specifically blocked or the cost issue unaddressed in the legislation written by Congress. If these issues are not addressed from the very beginning, we will be fighting the same issues with rising costs a decade later with other programs.

At this point, I begin to disagree with Dr. Packers as he goes on to say:

“So we spend more for healthcare than any other country in the world; but, Americans do not get the care they need. There is a simple reason. Treatment decisions are not being driven based on a physician’s knowledge or judgment. They are being driven by what payers are willing to pay for.”

It is true that patients may not get some of the healthcare they need at the time due to denial, which can be appealed to the ACA, and can be a tiring process. It could be approved, passed on to patients, resulting in higher premiums the following year, and the Part D Risk Corridor program pay for it if excessive for the present year. What Dr. Packers does not mention is the rising prices and cost of drugs being blamed by pharmaceutical company on R&D, tooling up to manufacture, etc. The counter argument is much of the R&D is funded by the US government through tax deductions and write-offs for pharmaceutical R&D and capital Overhead. Pharmaceutical profits are double digit at ~25% beating out hospital supplies and healthcare insurance, which is already limited in what can be charged back to the insured by the MLR. To blame insurance companies totally for the higher costs in healthcare is false. Furthermore, a doctor’s decision do not always lead to less costly cures or practices.

Maggie Mahar of Health Beat Blog would take the subject of costs a step farther and state Medicare will approve anything the FDA approves for usage regardless of the quality of outcome when measured against older proven treatments. Notably the VA does limit its pharmacy and its care is rated higher than that of today’s commercial, for-profit healthcare to which most citizens are exposed.

Dr. Donald Berwick, President Obama’s proposed appointment for Medicare and who was in charge of Medicare and Medicaid for 17 months stated;

“20 to 30 percent of health spending is ‘waste’ that yields no benefit to patients, and that some of the needless spending is a result of onerous, archaic regulations enforced by Medicare and Medicaid.

He listed five reasons for what he described as the ‘extremely high level of waste.’ They are overtreatment of patients, the failure to coordinate care, the administrative complexity of the health care system, burdensome rules and fraud.

Much is done that does not help patients at all and many physicians know it.”

That is the same Medicare/Medicaid being touted by many proponents today as an alternative.

Speaking of costs and pricing for pharmaceuticals, there have been recent incidents of skyrocketing costs on particular drugs. A short while ago, I wrote a post concerning the appointment of Alex Araz as the new HHS Secretary replacing Dr. Tom Price. Formerly, Alex Araz was the CEO of the pharmaceutical giant Eli Lilly & Co.’s U.S. division. He also served under George W. Bush administration as the HHS General Counsel and Deputy Secretary. During that stint, he received praise for his management competence with the HHS; although, he did not have a healthcare background prior to this position.

Here it gets interesting when examining what took place during his tenure with Eli Lilly. One of the leading costs identified in pharmaceuticals increases has been in the rising cost of diabetes medication.

“While the Tweeter-in-Chief, Trump tells us presidential campaign contributor Alex Azar will be a ‘star’ who will lower prescription prices,”

Public Citizen’s Peter Maybarduk (Director) had this to say: “Eli Lilly is notorious for spiking prices of a century-old isolated hormone during Azar’s tenure as president and vice president. Eli Lilly raised the price of Humalog by 345%, from $2,657.88 per year to $9,172.80 per year.

Maybe President Trump in appointing Alex Azar to be HHS Secretary should have asked the 6 million diabetic Americans whose insulin prices have more than tripled under Azar’s watch at Eli Lilly.”

This has nothing to do with R&D and has more to do with pharmaceutical companies controlling the market regardless of supply and throughput restricted manufacturing (capacity).

What I have tried to do is tie these articles together into one cohesive story of how the pharmaceutical industry, insurance, and healthcare can have an impact on healthcare costs. For those who are interested, my background does include working in the manufacture of hospital supplies and pharmaceuticals. Using various citations from these articles, I have tried to touch upon the impact of insurance companies, the healthcare industry, government intervention under the HHS, one particular Med in the market place, etc. Overall, what is going on in the marketplace.

Another article, I read the other day gets into the foundation of what is happening based upon a recently completed study by JAMA. Using this study, the Methods Man, Dr. Perry Wilson (MedPage Today) examines what is driving healthcare costs in his article Here’s What’s Really Driving Healthcare Costs using data from Factors Associated With Increases in US Health Care Spending, 1996-2013 and the US Disease Expenditure Project. Dr. Wilson breaks it down using three simple charts which I have consolidated to one. 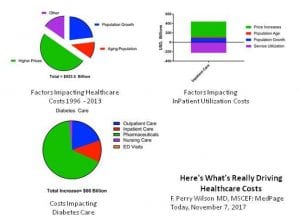 Going on: “Healthcare expenditures in the US being high and rising rapidly is nothing new, but the study appearing in the Journal of the American Medical Association identifies the exact components of healthcare that are driving those soaring costs. The data from this study suggests traditional economic forces break down in the US healthcare market.

Different chronic diseases have different patterns of price increases. The biggest increase was seen in diabetes care, as you can see here, driven largely by the rising costs of pharmaceuticals.”

The Chart breakdowns reveal the various impacts of healthcare costs moving from left to right and then downward:

• 50% of the increase in healthcare costs was simply due to higher prices.

• Inpatient care or Service Utilization (purple) went down from 1996 – 2013 as outpatient treatment increased; however, the price of the remaining inpatient care went up much more – increasing overall inpatient care spending by around $250 billion.

• Different Chronic Diseases have different patterns of price increases. The biggest increase was seen in diabetes care and driven largely by the rising prices of pharmaceuticals.

You can not make an argument about the regulation of costs “not” being one of the dynamic components of a healthcare plan given the continuous unhindered industry driven rising cost of healthcare. Yet, every healthcare plan I have read fails to mention cost regulation specifically, provide remedy for it, and many assume a natural occurrence of control.