A hurricane workaround for industrial production

A hurricane workaround for industrial production

Last week I mentioned that the regional Fed surveys plus the Chicago PMI can be used as a workaround to account for the effects of hurricanes on Industrial Production. It isn’t pretty and by no means is it perfect, but for the (hopefully only) two or three months that we need it, we can use the workaround to give us the underlying trend in production, particularly for manufacturing.This is a two-step correlation.

The first correlation is between the regional Fed indexes and the ISM manufacturing index.  This is something Bill McBride, a/k/a Calculated Risk, has been keeping track of for years.  Here’s his graph going back all the way to 2000: While the correlation isn’t perfect, most notably in the years 2010 and 2011, when the regional Fed average was high, and in 2015 and 2016, when it was too low, in general it holds, with the two rising or falling between positive and negative in tandem, even if we just use the Empire State and Philly indexes.

The second step is that the ISM manufacturing index similarly correlates well with, and slightly leads industrial production: 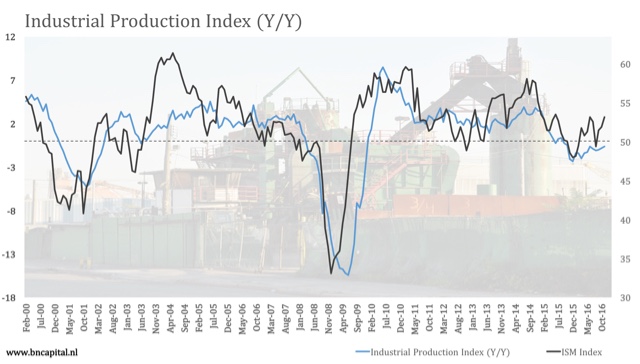 Again this is a pretty good correlation, even if the ISM manufacturing index was much higher than production in 2004, and somewhat higher generally since 2013.

Unfortunately FRED doesn’t publish  the regional Fed indexes, so I can’t show you a direct graphic comparison, but what I can do is give you a quarterly sampling of the monthly average of each going back to the “shallow industrial recession” of 2015.

To do this I am averaging the Empire State, Philly, Richmond, and Kansas City indexes, along with the Chicago PMI. Since Chicago uses a different scale (where 50 is “neutral”), to include that I subtract 50 and then double the result. I omit the Dallas index, since that includes the Houston area.  Florida is in the Atlanta Fed district, which doesn’t have a manufacturing index.

With the exception of March, which was greatly affected by a positive Richmond Fed outlier, the regional Fed indexes caught the rising trend in manufacturing from negative to positive, and especially positive at the end of the year.

Here is the monthly chart for this year so far:

*affected by Hurricane Harvey
**so far this month

While this is nowhere near a 1:1 correlation, as I said at the outset this is good enough to communicate the overall trend for the next several months until the hurricane effects recede.

Since both the Regional Fed indexes and the ISM manufacturing index have somewhat outperformed Industrial Production this year, to be confident that a positive average of regional Fed indexes translates into a positive hurricane-adjusted  industrial production report, we probably want to see a reading of at least +.3.   Even doing so, for August — and so far in September — the underlying trend remains positive.