Dean Baker complained yesterday about pundits who talk about the stock market in terms of economic well-being:

As someone who routinely considers both corporate profits and stock prices in terms of economic well-being, I disagree — somewhat.
The simple fact is, corporate profits are a long leading indicator for the economy as a whole, and stock prices a short leading indicator. If both are making new 4-quarter highs, they are important signs that an economic expansion will continue — and that means more employment and more wages for the average American. Conversely, if both are making new 4 quarter lows, there is a very good chance that jobs are about to be lost and nominal wage growth decelerate (or possibly worse).
The stock market is famously noisy — the old saying is that it has predicted 9 of the last 4 recessions — but the fact is, with the famous exception of 1929, stock prices have typically led both peaks and troughs in the economy, as shown in the below graphic from Doug Short: 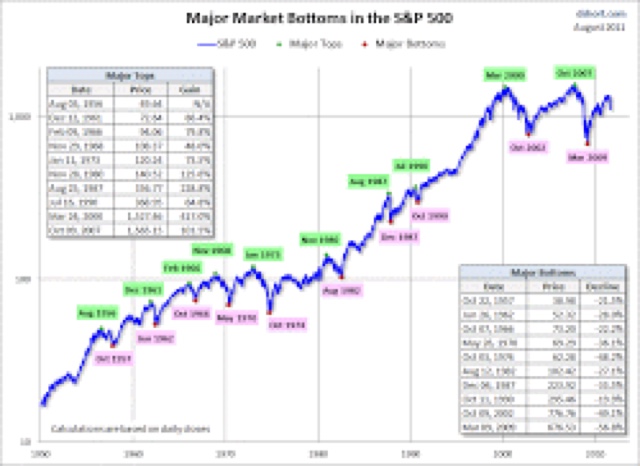 Corporate profits are less noisy and a longer leading indicator.
In short, I disagree with Dean Baker to the extent that the *direction* of both corporate profits and stock prices are important measures of the economy. Where I agree with him is that the *intensity* of the growth or decline is not.
To show you why, here’s a graph of corporate profits (blue) vs. average hourly wages for non-supervisory workers (red).  In this first graph, both are normed to 100 in 1964, when the latter series was first reported:

Once again, the *direction* of corporate profits is a good long leading indicators for when an economic expansion will end.
But the intensity is completely out of control.  By the end of 2016, corporate profits are about 3x higher compared with wages than they were in 1992 — which means they are about 6x higher than they were in 1964.
So I partially disagree with Dean Baker. The direction, but not the intensity, of corporate profits and stock prices are worthwhile signposts for the economic well being of average Americans. At the end of the day, that is why I am interested in them.
Comments Off on In which I (partially) disagree with Dean Baker about the stock market | Digg Facebook Twitter |