The big increase in unaffordability is a nasty surprise, eespecially since the vacancy rate appears to have bottomed over a year ago, so while apartment availability is still relatively tight,  the level of stress has decreased a little: 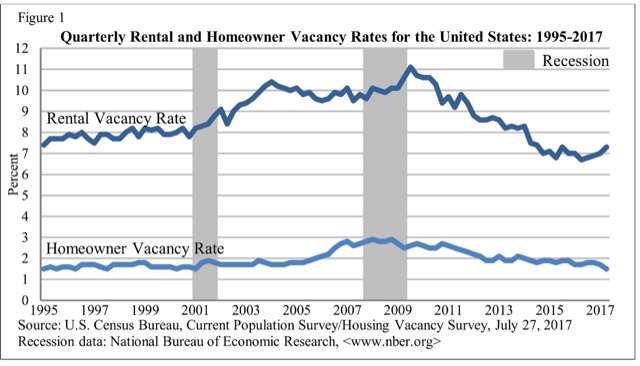 It is worthwhile to note that the CPI for owner’s equivalent rent, the major component of inflation, remains near the highest levels in a decade, although it has backed off a little this year:

There are two other median measures in addition to median asking rent from the HVS:   the American Community Survey and the Consumer Expenditure Survey.  Unfortunately both are only current through 2015.  The below table shows their YoY increases, compared with median asking rent:

Finally , HUD recently premiered a Rental Affordability Index,, using the ACS data. Similar to my chart above, it compares median renter income with median asking rent. Please note, however, that this has only been updated through Q1 of this year:

Like the median household income data, this shows renters’ income bottoming out in 2011-12, and rising since relative to rents as calculated by the ACS. 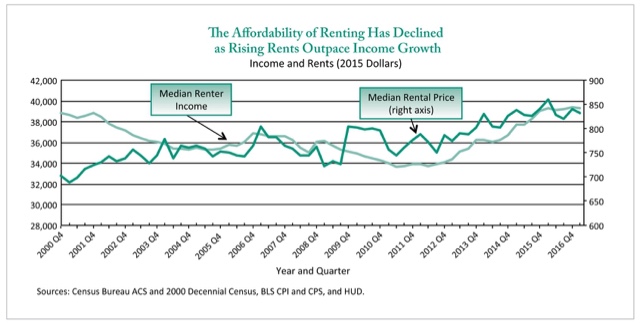 That gives us the “renatl affordability index” shown below:
. 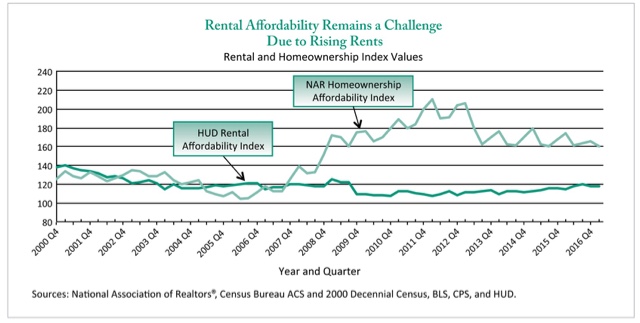 I’m not sold on HUD’s method, mainly because it relies upon annual data released with a lag. In other words, the entire last year plus is calculated via extrapolation.  I suspect we could get much more timely estimates using Sentier’s monthly median household income series, compared with the monthly rental index calculated by Zumper. It will be interesting to see if HUD confirms the Homeowner Vacancy Survey’s jump in UNaffordability when it releases its Q2 data soemtime later this quarter.

The takeaway from this quarter’s report is that, while the crunch in vacancies has probably passed peak, the “rental affordability crisis,” which had appeared to be abating at least a little, has come back with a vengeance.