Conundrum on waste and value in American healthcare

From Uwe E. Reinhardt in the New York Times:

When economists speak of the health system as a “high average-value sector,” they have in mind an average such as the distance AB in the chart divided by the distance OB, but with a monetary value – very often $100,000 or more – put upon the QALY (see, for example, this article). Of course, what a QALY actually is worth leads one quickly into a philosophical and ideologically charged thicket, especially when someone asks whether a QALY has the same monetary value regardless of on whom it is bestowed. I will delicately sidestep that issue here, although I welcome those who wish to offer their views on it.

When economists talk about waste in our health system, they have in mind not an average, but what they call the marginal (incremental) benefits to the marginal (incremental) spending on them. The ratio is negative on the input-output curve beyond A. That segment represents not only pure, unambiguous waste, but waste that is inimical to the health of patients – e.g., unnecessary surgery or imaging or unwarranted drug therapy with antibiotics.

But in many economists’ minds – and in quite a few minds of clinicians and management consultants, there is waste also in the almost flat but still upward-sloping segment in the curve, say, from C to A. That incremental spending is called wasteful in the sense that the monetary value imputed to the few QALY’s added by the extra spending is judged below the amount of that added spending (EB on the horizontal axis). 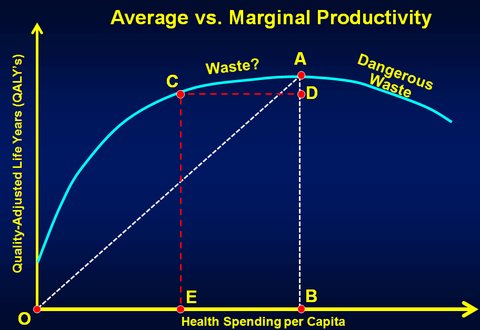