While we are busy paying attention to the 550th edition of Republican-caused fake crises (aka the sequester), a much more real crisis is brewing in the Eurozone. Richard Field at Trust Your Instincts flags a Reuters report that that Eurozone regulators are strongly considering a proposal to make not just investors in Cyprus banks pay for part of their bailout, but bank depositors as well.

Cyprus is a tax haven, and deposits in the banks there come to some 70 billion euros, more than 3 1/2 times the tiny country’s 18 billion euro gross domestic product. One proposal under consideration would be to hold all deposits over 100,000 euros in escrow — for up to 30 years! Another proposal, says Reuters, would “impose a retroactive tax on all deposits over 100,000 euros…” If either of these options looks like it is close to being approved, it is likely to cause a run on banks in Cyprus. As Field argues, if one of these plans is established, depositors will likely wonder if it could be applied to other debtor countries like Spain or Italy, causing even more turmoil. (Note: 100,000 euros is the maximum that can be covered by deposit insurance programs similar to the FDIC in the U.S.)

While European leaders seem to want to blunder into a new way of creating a euro crisis, the evidence continues that their preferred austerity policies are failing. The European Commission has announced that the eurozone will remain in recession throughout 2013, according to a separate report by Reuters. Previously, the Commission had predicted that the recession would end this year. As Paul Krugman shows, the countries that have had the severest austerity have had the largest contractions in their economy. Based on International Monetary Fund estimates of the policy change in a number of European countries, he plots this against the change in their real gross domestic product from 2008 to 2012: 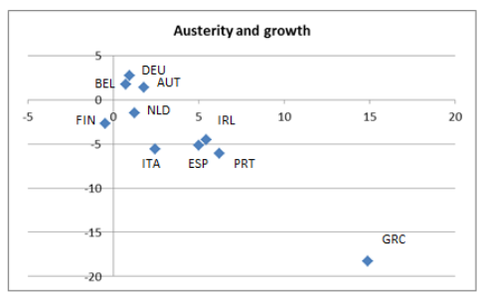 So, for example, Greece has imposed austerity equal to about 15% of potential GDP, and seen its actual GDP shrink by about 18%.

Despite the clear failure of austerity policies in the eurozone and Great Britain (where 9 months of recession were followed by one quarter of growth but a renewed slump in the last quarter of 2012, and Moody’s just downgraded the country’s debt), Republicans are still trying to impose budget cuts on the country that we voted against in November. As I discussed then, the sequester’s discretionary budget cuts will be unambiguously bad for the middle class. Now, Republicans are trying to convert the defense cuts of the sequester into further slashing into middle class programs, while President Obama has offered to convert Social Security’s inflation adjustment to so-called “chained CPI,” which will slowly but relentlessly cut into benefits year after year through the magic of compounding. According to Dean Baker at the link above, the reduction would be about 0.3% per year, so benefits will be 3% lower after 10 years, 6% after 20 years, etc.

Considering how bad middle class retirement prospects are already looking, the President’s offer would be disastrous for millions if implemented. The right course of action is simple: cancel the sequester, forget about cutting Social Security (which is not part of the so-called debt problem anyway), and focus on jobs and growth. As Paul Krugman says, “End this Depression Now!”