Too Big to Fail? Wall Street and Main Street: How Big Are They

Too Big to Fail? Wall Street and Main Street: How Big Are They

Note that “Main Street” here includes government expenditures — 20% of the total. Remove those, and Wall Street money flow is 58 times the size of Main Street.

(FIRE is finance, insurance, and real estate.) The financial industry has spent the last 30 years inflating its own bubble.

So much for the flows. What about the stocks? This is harder to compile, and it’s also difficult to compare Wall Street and Main Street. I’ll explore this in future posts. But here are two numbers worth pondering:

The red bar on the left is the one I’m concentrating on here. (It’s probably a big understatement, because it doesn’t include assets held by financial corporations; see “tally stick,” below.) Divvy these financial assets between every household in America, and each one gets half a million dollars. Yow.

Think of that pool of financial assets as stored money. While they couldn’t all be turned into actual “money” at one time, they constitute the pool of money held by people and businesses, which money flows into (from personal savings and undistributed profits) and out of (for consumption, fixed investment, and tax-paying). This pool is also expanded by new credit/money creation, and increases in asset values. It is shrunk by loan payoffs and declines in asset values.

Now here’s the key point to understand: everything of value to humans is created by the people and businesses on Main Street producing, buying, selling, and investing (in productive assets and housing). Yes, Wall Street produces and sells some of that value: vehicles for investing business and personal savings in a variety of real assets (“intermediation”), safe storage (compared to your mattress), convenience, bookkeeping, advice, etc. That’s all paid for via fees and commissions, and those Wall Street fees and commissions are counted as part of GDP (aka Main Street). As they should be.

But you have to ask: did Wall Street deliver 35% or 45% of the human value of all American businesses in the 2000s? That was the “financial services” share of business profits — the reward received for value created. (I’ve seen some variance in this number, but 34% is the lowest number I’ve seen.)

You don’t have to imagine “evil actors” (though there is some proportion of those on Wall Street) to understand why a massive financial sector could be really, really bad for the real economy.

Imagine one of those super-hot racing sailboats that let you pump water from side to side as you switch tacks, to keep the boat upright, stiff, and stable. Now imagine all that water leaks out into the bottom of the boat, so it’s sloshing around with the wind and wave action. Every time you run into a big wave, all the water flows to the front of the boat. A big gust of wind heels you over, and all the water flows over in the same direction. It makes the boat really unstable.

That water is the money swirling and sloshing around in the financial economy. In the short term, those flows are are driven largely by people trying to predict what other people are going to do, so they can go in the same direction. Sound like our sailboat? With $55 trillion of financial assets in the U.S (4 x GDP), and those assets trading hands maybe twelve times a year, that’s a lot of sloshing.

It’s no wonder the sailboat gets knocked over periodically.

Now imagine that a whole bunch of your best and brightest crew members are spending their time with buckets pouring more water into the boat, and moving the water around from place to place (while furiously collecting as much as they can in little bottles in their pockets). Do you think you’re gonna win the race?

But here’s what’s weird: neoclassical economics basically ignores the motive effects of financial sector, treating it like a transparent, frictionless, and inert tally stick or bookkeeping system — like the bank in Monopoly. As Dirk Bezemer has pointed out, the model that the Fed uses to predict our economic future does not include the financial sector as an active entity. 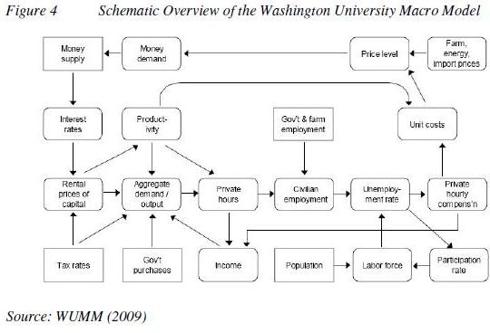 Paper (pdf). A very nice summary here. You may take issue with Bezemer’s statements, but it’s certain that the Fed’s model does not consider the spectacularly large and highly variable flows within the financial economy, or model their effect on the real economy beyond the rather static notions of money supply and interest rates.

This is especially strange since the Fed is explicitly tasked with compensating for the business cycle. And the business cycle is largely driven by … the financial sector. (Main-street businesses’ cash flows, profits, and losses don’t display anything like the volatility of financial assets.)

Aside from those destabilizing money flows, which are pretty much inherent to financial economies (though their effects on the real economy depend crucially on plain old quantity), what other pernicious effects might we expect to see when a self-inflating financial sector does a very good job of inflating itself?

Moral Hazard. Because the financial economy is so massive, government has no choice but to bail it out if it gets in trouble. Financial-industry players know that, and they act accordingly.

Stagnant Growth in the Real Economy. As the pool of new financial assets (many of which are fabricated using finance-industry-issued credit) increases in value (in a boom or bubble), we see:

rising commitments for the real sector to finance asset transaction out of wages and profit, and rising actual debt levels. When the asset was sold at a profit, someone else bought the asset at the new, higher price. He or she financed this either by diverting liquidity away from real-sector transactions, or by borrowing – at higher levels than did the first buyer. Therefore asset price booms are accompanied by rising debt and by a slowdown in real-sector nominal growth.

Government Capture. Unlike welfare payments, for instance, which distribute money widely and hence are difficult to bring to bear on lobbying etc., the financial sector concentrates wealth, so it can be effectively used to capture government — which further benefits the financial sector, in a self-perpetuating cycle.

Misallocation of Resources. Since the financial industry provides rewards to employees and shareholders that are well in excess of the human value it produces (even considering its role as an intermediary delivering financial capital to the real economy, and its resulting second-hand contribution to delivering things that humans value), both financial and human capital are diverted away from the real economy that produces stuff we want.

I can think of several others (without even starting on things like fairness), but I’ll leave it to my gentle readers to fill out the whole set.

Supply siders, conservative politicians, and freshwater economists are fond of referring to financial capital as the “fuel” of the real economy. But if anything, labor, sales, innovation, or maybe natural resources constitute the real economy’s “fuel.”

Financial investments in business — whether in the form of equity or credit or some weird hybrid — are more like lubrication. A flow of financial capital is crucial to keep the machine running, but you don’t need all that much flow relative to output (43x? 58x??). (And Fama and French showed us long ago that it takes very few traders or trades to create an efficient market with reasonably accurate price signals.) This especially as business owners consistently tell us that investment is dead last on their list of business constraints.

Too much lubrication, in fact (I’m repeating my own line here), and the shop floor starts to get very, very slippery.

Truth told: we have truly oceanic quantities (both flows and stocks) of money, credit, liquidity — whatever you want to call it — far in excess of what’s necessary to lubricate the real economy. When somebody tells you that we need more savings to augment those quantities (and that we should, for instance, tax the rich less so they can provide those savings), I suggest that you go directly to Go, and look at the first three graphics in this post.

If I am correct, the financial sector is much larger than is necessary to lubricate the real economy, and as a result delivers far greater downsides than are necessary to fulfill its valuable purposes.

Is there anything we can do about that? Monsieur Pigou gave us the solution long ago: If you want less of something, tax it.

* It amazes me that these Wall Street figures are so hard to compile, and in fact are never compiled. (Google “financial industry profits” site:wsj.com. One useless hit.) The ratio between the financial economy and the real economy is not part of the everyday language of economic discourse. A kudos to Dean Baker and the folks at CEPR for putting these Wall Street numbers together.