The Mortgage Bankers Association (MBA) reports that the starter rate for the one year Adjustable Rate Mortgage (ARM) is now over 5% for the first time since early 2002. 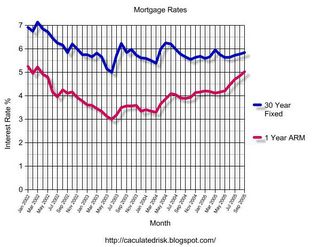 The above chart uses the month end rates as reported by the MBA. Interest rates bottomed in May/June 2003 and the ARM has been rising steadily for the last two years. The interest rate on a 30 year fixed rate loan has increased at a slower rate than the ARM (part of Greenspan’s conundrum).

The rising rates have not slowed the housing market – yet. Since interest rates bottomed in Q2 2003, house prices have increased 15.2% nationwide according to the OFHEO (stated in real terms, adjusted for inflation using CPI less shelter). San Diego’s prices have increased 39.5% and Miami 35% in real terms over that 2 year period. Even with rising rates, house price appreciation has exceeded historical norms.

There are signs that transaction volumes for housing may have peaked. New home sales declined in August (the most recent report), but volumes are still near record levels. It will take several months to determine if the trend has changed (see Katrina note below). However housing inventories, for both existing and new homes, have been increasing for some time. New home inventories are at record levels and existing home inventories are at the highest level since the early ’90s housing bust. 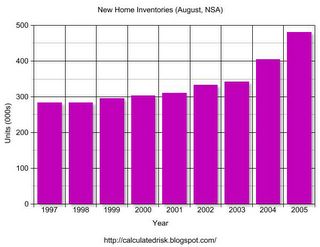 I believe that the housing cycle has peaked and rising mortgage rates will only accelerate the coming slowdown. The sequence will probably be: rising inventories, followed by declining transaction volumes and finally falling prices.

Even if housing prices just flatten, there are potential problems for the economy: see My House, My Piggy Bank. Fleckenstein on housing: Empty houses, falling prices: A boom dies. And from BusinessWeek: If Housing Slumps, How Safe Are You?

“If real estate cools dramatically, there goes half our economic growth,” says Barry Ritholtz, chief market strategist at Maxim Group. “There is danger of recession …”

On Katrina: Some observers, like Ritholtz, are concerned that the “Fog of Katrina” might obscure an already slowing economy and lead the FED to raise rates too far. As an example, housing data may be skewed by the reconstruction in the gulf. From the Census Bureau: Questions on Katrina.

Q: Will completely rebuilt houses be counted as a new house being built?

Yes. Following Hurricane Andrew in 1992, the definition of a new housing start was modified to include structures where the entire building was razed and a new house was built on the existing foundation. We plan to work with local jurisdictions in the affected states to assist in the proper classification of the permits for the units being rebuilt.