Gasoline: A Time for Caution

‘… four major refineries … are either flooded or without power, and are likely to be out of commission for several weeks, perhaps months. Together, these refine 880,000 barrels a day, or 5 percent of domestic capacity.’

And, according to the Lundberg Survey, gasoline prices are already at record levels in both nominal and real terms:

‘Damage to Gulf Coast refineries and pipelines by Hurricane Katrina pushed retail gas prices to historic highs in the past two weeks, with self-serve regular averaging more than $3 a gallon for the first time ever, according to a nationwide survey released Sunday….
The weighted average price for all three grades surged more than 38 cents to nearly $3.04 a gallon [eclipsing] the nation’s previous high weighted average for all three grades [adjusted for inflation of] $3.03 in current dollars.’

Several actions have been taken to meet demand without even higher prices: 1) draw down existing stocks of gasoline, 2) import more refined products and, 3) the White House has asked oil companies to postpone refinery maintenance. All of these solutions are short term and carry significant risks.

According to the DOE, existing stocks of gasoline are already below the normal range for this time of year. See the following graph: 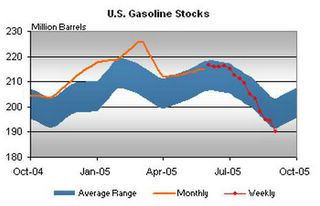 Drawing down gasoline stocks too far carries the risk of prolonging the period of record gas prices. Importing refined products reduces the supply elsewhere, especially in Europe. According to the Daily Record, UK’s Gordon Brown warned yesterday that ‘Hurricane Katrina could sweep Europe into recession’. And postponing maintenance carries the risk of accidents and further disruptions. The NYTimes reports that refineries were already running at 95% of capacity before Hurricane Katrina:

‘… a level that is dangerously high and that has led to a growing number of accidents in recent years.’

There is some good news on the demand side, as the DOE reported demand for gasoline dropped 4% for the last week. Both Dr. Polley and The Big Picture commented on this. However, there can be significant variability in the week to week DOE data. In fact there have been at least four times since early 2004 that the week to week demand dropped or increased by 5% or more without any clear explanation. Hopefully the drop in demand will continue.

Where does this leave the US? It is critical that the four ‘out of commission’ refineries return to operation as soon as possible. But even more important, the US needs to reduce demand for gasoline consistently, by 5% or more, until the refineries are back in operation. Perhaps the record high prices will suffice, but I believe this is a situation that calls for leadership – something sorely lacking in the US – and a call for conservation on the part of all Americans for the next few weeks or months (and why not years?).

On another note, I posted a few photos from my trip to Yellowstone on my blog.