This is the way the bubble ends: not with a pop, but with a hiss.

Housing prices move much more slowly than stock prices. There are no Black Mondays, when prices fall 23 percent in a day. In fact, prices often keep rising for a while even after a housing boom goes bust.

So the news that the U.S. housing bubble is over won’t come in the form of plunging prices; it will come in the form of falling sales and rising inventory, as sellers try to get prices that buyers are no longer willing to pay. And the process may already have started.

We can look back at historical data and confirm Dr. Krugman’s point. Here are the nominal price declines for three busts: Los Angeles in the early ’90s, San Antonio in the mid ’80s (the oil patch bust) and Hartford starting in ’89. The peaks of all three housing booms are aligned on the left and the relative price declines are plotted by quarter after the local market’s price peak. 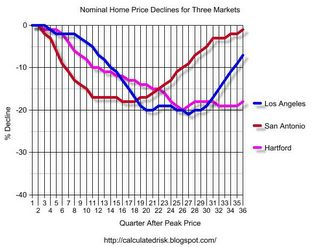 Prices did not collapse, rather they declined “with a hiss” over a number of years. For the declines in real terms (adjusted by CPI less shelter), see this previous post. Back to Krugman:

Bubbles end when people stop believing that big capital gains are a sure thing. That’s what happened in San Diego at the end of its last housing bubble: after a rapid rise, house prices peaked in 1990. Soon there was a glut of houses on the market, and prices began falling. By 1996, they had declined about 25 percent after adjusting for inflation.

And that’s what’s happening in San Diego right now, after a rise in house prices that dwarfs the boom of the 1980’s. The number of single-family houses and condos on the market has doubled over the past year. “Homes that a year or two ago sold virtually overnight – in many cases triggering bidding wars – are on the market for weeks,” reports The Los Angeles Times. The same thing is happening in other formerly hot markets.

Rising inventories is the story in much of the country. If the process has already started, as Krugman suggests, the next step will be a drop in transaction volumes followed by the slow, steady decline in prices over many years.

Meanwhile, the U.S. economy has become deeply dependent on the housing bubble. The economic recovery since 2001 has been disappointing in many ways, but it wouldn’t have happened at all without soaring spending on residential construction, plus a surge in consumer spending largely based on mortgage refinancing. Did I mention that the personal savings rate has fallen to zero?

Now we’re starting to hear a hissing sound, as the air begins to leak out of the bubble. And everyone … should be worried.

That is my biggest concern: the impact of the deflating housing bubble on the US economy.