The Euro and the Trade Deficit

The Euro has weakened substantially against the dollar over the last few months. Probably the two main reasons are the weak economies of many European Union countries and the recent failure of the EU Constitution. Still, the Euro is significantly stronger than a few years ago. 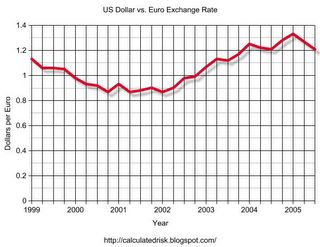 Although there are several factors that determine the exchange rate, such as relative interest rates, inflation and growth rates, some observers were optimistic that a weaker dollar would help with the US trade imbalance. So has the strong Euro helped increase US exports to the EU? 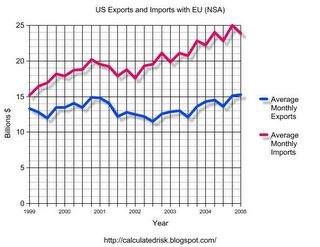 The trade deficit has grown even while the Euro strengthened. The following chart shows the average monthly trade deficit with the EU by quarter. The most recent drop in the first quarter is a seasonal factor. YTD imports from the EU are up 7% over 2004. 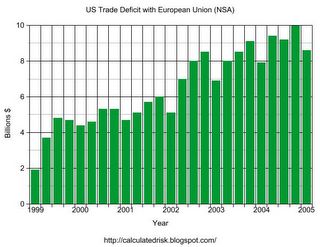 In conclusion, it doesn’t appear that the strong Euro has helped with the US’ burgeoning trade deficit with the EU. For the total 2005 US trade deficit, I agree with Dr. Setser’s estimate of $700 to $800 Billion and “a current account deficit in excess of $800 billion.”

On housing, I recommend Greg Ip’s article in the WSJ: “What Happens If Real Estate Goes Bust“