I have been monitoring  the close relationship between bond yields and monetary velocity ( personal income/zero maturity money) for years without coming to strong conclusion about what to make of it.  In particular, it displays the long term secular rise and fall of bond yields before and after 1980.. 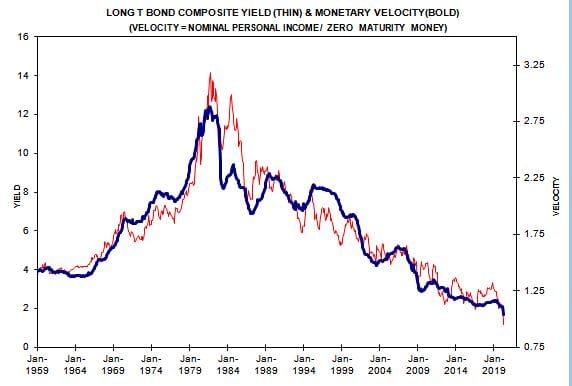 I do not know of any other economic variable that parallels bond yields so tightly for such a long period.  OK, first question.  Which way does the causal relationship work?  Is it rates driving velocity or velocity driving yields?  Or is it some other variable driving both?  I use to think velocity was a function of real interest rates.  At least that was consistent with the monetarist school of economic thought, especially in explaining the 1930s depression.  But now we are back to negative real interest rates and it does not yet  appear to impact this relationship.  If we are at a long term secular bottom in yields I would expect to see monetary velocity start to rise. But it has not happened yet. But now that we are back to uncharted waters, I would be interested in hearing what others have to say about velocity and bond yield