Brace yourselves: the US is setting up a ghastly “natural experiment” – by New Deal democrat

When I began my “Coronavirus Dashboard,” I was hopeful that it would document the slow progress towards turning a bad situation around, and the ultimate tamping down of the pandemic. Surely increasingly intense and overwhelming public pressure would force a critical mass of government officials to do what was necessary?

Now I am not so sure. The number of cases continue to climb at a double-digit exponential rate, if a less aggressive one than earlier in March. But even more infuriating is that the President of the United States is all but advocating for letting the virus run free come Easter Sunday. This has had a marked effect. The march to universal Statewide lockdowns has almost screeched to a halt. Most importantly, GOP governors in the Confederacy and in the High Plains, plus Arizona, have completely put the brakes on any statewide “stay in place” orders.

And even in those States which have taken relatively aggressive efforts at containment, the level of testing, let alone isolation and quarantine of identified cases, is running far below what is necessary. In fact it looks like it is falling further and further behind.

In short, I suspect that my dashboard is instead going to document the catastrophe of a deadly pandemic allowed to get completely out of control.

Earlier this month I documented, almost daily, how the pandemic was spreading at an average 34.6% daily. Last Monday, I projected that rate forward another 15 days, meaning that by April 5 there would be 2,500,000 cases. Here’s what the actual growth looks like so far compared with that projection:

The actual rate of increase is approximately 24% for each of the last 7 days. On a “less worse” note, the rate is only 22% over the last 5 days. Even more alarming, here are the dates in which the number of cases expanded by 10:

Every 8 or 9 days, the number of infections have risen 10-fold. Let’s project that forward:

At this rate, by the end of April, every man, woman, and child in the US would be infected. That won’t happen, if for no other reason than the virus will spread less efficiently once it mainly “spreads” to people who have already recovered and so will have developed antibody immunity to it.

And here is a graph from Kevin Drum, showing that at the rate deaths have been growing in March, by April 26 there will have been *1 million* US deaths from coronavirus: 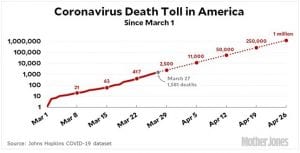 To be blunt: so far “social distancing” has only slowed down the exponential rate of increase. While the effects of State and region-wide lockdowns aren’t yet apparent, the fact that testing isn’t keeping up means that we are far, far away from South Korea style monitoring. Another two or three weeks of this kind of exponential growth and the pandemic will simply be pervasive and out of control. Against that the only hope is that the advent of warmer weather in April might naturally damp down the spread, but don’t hold your breath for that.

Against that background, let me get to the second part of my essay: a ghastly “natural experiment” is being set up in three regions of the US.

Here is The NY Times’s most recent map, from Friday March 27, of States that are under total lockdowns plus States where there are only some municipal or regional lockdowns: 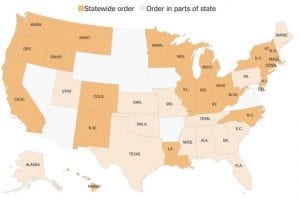 The US has 3 regions of coronavirus response:

1. Every State in the Mountain and Pacific West, plus Alaska and Hawaii, is under statewide or nearly statewide lockdown, with the exception of Wyoming and Arizona.

2. Every State in the old Union, except for Iowa, Maine, and Maryland, plus North Carolina, is under statewide lockdowns (and really wtf is up with Governor Northam of Virginia, who is a physician?!?)

3. No State in the old Confederacy run by a GOP governor, with the exception of the Democratic governor of Louisiana, or in the Great Plains west of the Mississippi, except for Kansas, is under a lockdown.

The “natural experiment” that is going to take place over the next few weeks is the rate of spread in the first two regions vs. the third region.

Brace yourselves. What has happened in March with regard to the effects of this pandemic is akin to only the first inning of a baseball game. This is almost certainly going to get a lot worse.
Posted by New Deal Democrat