In a previous post, I argued that rising incomes and increasingly liberal attitudes may move opinion and policy in a progressive direction in the United States.  However, the Democratic victory in the 2018 election did not signal the start of a progressive “revolution”; it mostly reflected a predictable reaction to the unpopular policies of Trump and congressional Republicans.  Any major progressive shift in policy will be hard fought and will likely take years to materialize.

Given the serious obstacles progressives face and the importance of the issues that confront us, it is critical for progressives to think carefully about how to maximize their chances for success.  However, as I argued here, idealism is preventing progressives from thinking strategically about policy and politics.  My goal is to persuade progressives that they can – must – be much more hard-nosed and strategic to achieve their goals.  I will focus on two basic tools progressives can use to make progress in this difficult political environment – policy design and political persuasion.

To achieve their goals, progressives need to design policies that 1) will help win elections, or at least will not harm Democratic candidates, 2) will win over congressional allies who are not-so-progressive, or maybe even not-progressive-at-all, 3) will not trigger a backlash, 4) will withstand hostile scrutiny from the Supreme Court, and 5) are relatively immune from executive branch obstruction, because it is likely that the executive branch will fall under hostile Republican control on and off over at least the next decade, and 6) will actually achieve progressive goals if they are implemented successfully.  (For a small example of a policy that may violate this final condition, see Peter Dorman here.)  Designing policies to win over reluctant allies means, in part, taking into account the deep suspicion that most Americans have about the competence and fairness of government.

Winning elections and legislative allies on specific bills depends on persuasion as well as policy design.  In the short run, progressives can win over voters and legislators in two ways.  First, progressives can frame policies in terms of the values of those they are trying to persuade.  This is an obvious point, and it would hardly be worth mentioning were it not for the fact that so much political communication violates this basic rule.  (Conservatives violate this rule as well as progressives.  See here.)  Second, progressives can win over cross-pressured or conflicted voters simply by drawing attention to areas of agreement and downplaying areas of disagreement.  In the current American context, I will argue that this means making elections about economic issues rather than social issues.

In the medium term, progressives can also make progress by changing how people think in a deeper way – for example, by getting people to see that gay marriage is a just and fair institution, that trans people should be treated with respect, that marijuana should be legalized, or that racial disparities in criminal punishment are unjust.  Critically, however, this kind of deeper value change takes time.  Even the exceptionally rapid shifts in opinion on gay marriage and marijuana took decades (data from Pew): 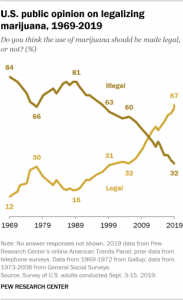 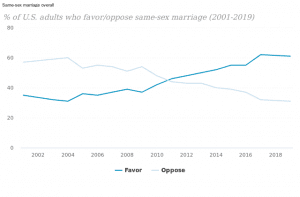 This means that it is a mistake for politicians to use election campaigns to challenge prevailing values, or for progressive voters to force candidates in primaries to endorse controversial values that will cost them votes in general elections.  Barry Goldwater may have nudged public opinion to the right in 1964, but he got crushed in the general election.  Although there may be some room for opinion leadership in elections, by and large value change has to happen in civil society before it is reflected in election results – it is the job of activists, educators, religious leaders, etc., not political candidates.

Over the next few weeks I will give several examples to illustrate how idealistic thinking is leading some progressives astray, and what a more strategic approach to progressive politics and policy design would look like.