The ICER (Institute for Clinical and Economic Review)

Is an independent and non-partisan research organization. Its purpose is to evaluate the clinical and economic value of prescription drugs, medical tests, and health care and health care delivery innovations. ICER conducts rigorous analyses of all clinical data with key stakeholders to include patients, doctors, life science companies, private insurers, and the government and translate the evidence into policy decisions that lead to a more effective, efficient, and just health care system.

As explained by their site information, ICER is known as the nation’s independent watchdog on drug pricing. It’s drug assessment reports include a full analysis of how well each new drug works and the resulting “clinical value, quality of life, benefit to the health-care system and society” used to establish a price. Using the drug assessment report, a “value-based price benchmark” is established  reflecting how each drug should be priced addressing all four factors. Reports also evaluate the potential short-term budget impact of new drugs to alert policymakers to situations when short-term costs may strain health system budgets and lead to restrictions on patient access. Ensuring objectivity in its work, all ICER reports are produced with funding from non-profit foundations and other sources that are free of conflicts of interest from the life science industry or insurers.

What I have seen in the past is the ICER establishing pricing for new drugs taking into consideration these factors; “the patient’s quality of life, and the resulting benefits to the health-care system, and society.” This is the first time I am seeing the ICER looking at price increases and determining whether the value delivered substantiates a price increase. By the numbers: Here are the drugs (and manufacturers) highlighted in a recent ICER’s report, with the increase in net spending attributable to each drug’s price increase, and citing the increases could not be justified by the value delivered. 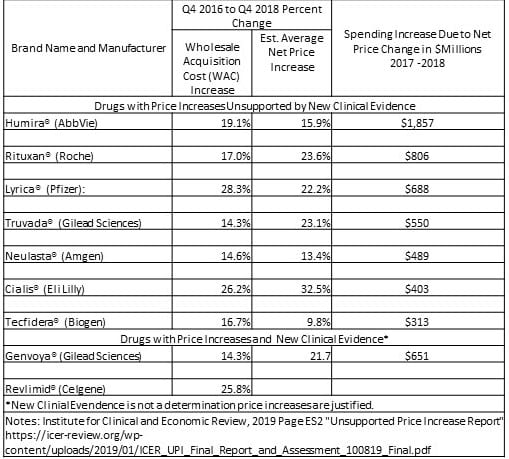 The figures reflect the dollars Americans spent on drug copays and other out-of-pocket costs in addition to the higher amounts people paid through health insurance premiums and taxes.

Past the leap is an explanation on how the ICER reached its conclusions for the nine drugs and the limitations to this findings.

As depicted In the chart the net price increases for the seven drugs which the ICER states are unsupported by new evidence of resulting value. The prices were responsible for increasing total US drug spending by more than $5.1 billion from 2017-2018. Humira accounted for the greatest single impact on spending. Humira’s average US price increased 15.9% over the 2017 – 2018 period after accounting for rebates and other concessions. Humira cost American patients and insurers an ~ $1.86 billion more than what would have been spent if it’s price had not increased. As I have written in other posts using JAMA, Health Affairs, etc. data, the pharmaceutical industry has been increasing pricing YOY for brand name drugs and also generic drugs at similar percentages.

Similar to another study May 2018 paper on pharmaceutical pricing trends covering the years from the period 2012 – 2017, ” Trends in Prices of Popular Brand-Name Prescription Drugs in the United States.” The question it asked  was, “What are the prices of top-selling brand-name prescription drugs in the United States and how have these prices changed in recent years?.” It drew upon data as taken from 35 million individuals as found in the Blue Cross Shield Axis (data base) for the time period of January 2012 through December 2017. The researchers reviewed prescribed drugs exceeding $500 million in US sales or $1 billion in worldwide sales. From this pool of information, 132 brand-name prescription drugs were identified. 49 of the 132 top-selling drugs exceeded 100 000 pharmacy claims, substantial cost increases among these drugs was experienced within the inclusion parameters with a 76% median cost increase, and 48 of the drugs had regular annual or biannual price increases.

Between 2012 – 2017, the study reveals an industry wide increase in costs for top-selling brand-name prescription drugs and less costly generic replacements. The increase in costs, biannual, and annually for 36 pharmaceuticals since 2012 can also be seen in newer drugs coming on the market after 2012. A pattern or practice of pricing determination based upon 4 values in the pharmaceutical market clinically, patient quality of life, benefits to the health-care system,  and benefits to society. The links to what I wrote and the JAMA article are above.

ICER analysis reviewed a list of the 100 drugs with the largest sales revenue in calendar year 2018 for the US. The information was taken from SSR Health LLC, the health care division of SSR  LLC which is an independent investment research firm. ICER delete 23 drugs from the list where the increase in wholesale acquisition cost (WAC) over the two years (eight quarters – fourth quarter 2016 through fourth quarter 2018) was less than twice the increase in medical consumer price increase (CPI) over the same period. For study purposes, it is a parameter while in real life and expenditures by users even this increase is significant.

From the remaining list of 77 drugs, the increase in spending on these drugs in the US during 2017-18 was due to increases in net price.  After the exclusions, ten drugs were to be selected for assessment using new clinical evidence obtained from the prior three years (2016 through 2018) for those drugs and based either on submissions from manufacturers or an ICER systematic review. ICER reviewed randomized clinical trials, high quality comparative observational studies, and, for low frequency harms, large uncontrolled studies. Two drugs were dropped based upon company data justifying their price increases and one was added which created a list of nine.

ICER does not have the capacity to do a complete, more thorough  economic report of the new clinical evidence provided for the two drugs having new evidence or for each drug. Neither could it do so even with that capacity in a reasonable amount of time where it could be of value to decisionmakers.

If you can, take a bit of time and read the findings on each drug and also the responses by some of the companies to ICER’s evaluation.

This is the first time I have seen an agency take action such as what the ICER has done and leap into the fray of healthcare costs or drug pricing so to speak. Over the 10 days I have spent reviewing this 150 pages of this report; I find the ICER has shown evidence of what we have all suspected, what the JAMA and Health Affairs have detailed and laid a basis for us to believe, and has pointed in a direction which does or can lead to developing careful policy to meet the rising cost of pharmaceuticals and healthcare.