From the World Economic Forum:

Kim Kardashian is an unlikely champion of statistics, but a tweet from the reality TV star in January 2017 contained a startling figure that has been named International Statistic of the Year.

She shared a table showing a range of violent or unexpected ways people meet their deaths annually in the United States. Kardashian’s aim was to highlight how many more Americans are killed by fellow citizens with guns, than by terrorists.

The table also revealed that lawnmowers are actually more deadly than terrorists.

According to the table below, first published by the Huffington Post, an average of 69 people are killed every year in accidents involving lawnmowers. By comparison 14 people are killed each year by terrorists. The killers in this category include Muslims inspired by jihadist philosophy as well as white, far-right extremists. Both categories include American citizens. 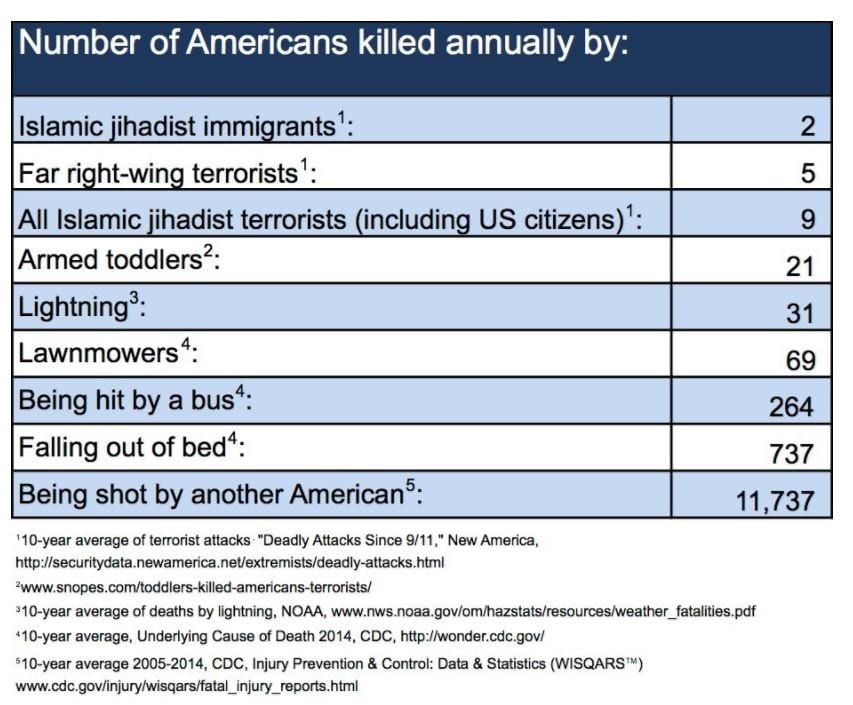 The piece goes on:

This disparity between terror-related deaths and everyday accidents like falling out of bed highlight a gap between reality and people’s perceptions.

Chapman University’s 2017 Survey of American Fears reveals that 43.3% of Americans are either afraid or very afraid of a terrorist attack.

Let’s compare those fears with reality. Americans are 14,381 times more likely to be killed by a firearm held by a fellow citizen than they are to be killed in a terrorist attack.

But the US isn’t the only country where there are large gaps between perception and reality.

In fact, according to Ipsos MORI’s latest Perils of Perception Index, the US has only the 15th largest perception gap in the world.

This may not be as impressive as awarding Barack Obama a Nobel Peace Prize in 2009 for accomplishing, well, um, ah… But regardless, it serves as kudos to Kim Kardashian.

That said, I find this , er, statistic to be an odd choice for praise. I assume Mrs. Kardashian and the worthies at the World Economic Forum spend more time on airplanes than the average bear, and perhaps they occasionally travel commercial. And yet, it would appear that not one of them asked himself or herself why there are lines of people waiting to walk through metal detectors and pass their luggage through security. Or why there are bollards going up in NYC. Or why intelligence agencies spend so much effort on trying to deal with terrorism.

Because if they had, they might have realized why the the death rate from Islamic terrorism is low relative to other ways to die: because we collectively put a heck of a lot of resources into preventing Islamist terrorists from killing people. I don’t know how much how much is spent preventing lawnmowers from running amok, but its got to be infinitesimal in comparison.

Furthermore, reducing these expenses can have deleterious effects. Charlie Hebdo reportedly spends a million and a half dollars a year on security; the pity is they didn’t start spending that much a few years ago. And the Merkel legos sprouting across Europe aren’t going up because people over there are concerned that the Ku Klux Klan is branching out across the waters.

Also… most people don’t quite realize for how long these expenditures have been going on, and how much effort has focused on dealing with what we now call “Islamist” terrorism. Its easy to think of 9/11. But one can go back to the 1970s and find many, many skyjackings that were precursors to 9/11. (Plus the Lod airport massacre.) That isn’t to say there wasn’t terrorism before the 1970s, but it typically had a non-Islamist motivation.

The WEF also makes the point that gun violence by other Americans causes a lot more deaths than one’s fellow Americans.  That is also true, but somewhat misleading. In general, victims of gun violence are killed by people they know or consider to be their rival.  There are simple ways that the average person can severely reduce their likelihood of being killed by another American with a gun, mostly in the nature of avoiding certain people, certain places, or or certain activities.  That isn’t to say all victims can engage in such avoidance – children growing up in the wrong inner city, for example, often don’t have options but those are exceptions and not the rule.

On the other hand, terrorism is random, at least from the perspective of the victims.  Its death toll also isn’t limited except by the competence of the terrorist.  The guy who shoots his wife because he is drunk or feels wronged or whatever generally doesn’t have an interest in killing everyone on the block.  But the guy who runs down a bunch of civilians, or shoots up a concert (be it in Paris or Las Vegas) would happily kill many more if given half a chance.  To be precise, they would kill every single person they deem an infidel if they could.  The fortunate thing is that most of them of inept.  However, not all of them are.

All of which is to say, I suspect Kim Kardashian missed the point.