A Bit More on Inflation Expectations

I honestly surfed here just to see if anyone was still interested in inflation expectations now that The Fed has shifted from extraordinary efforts to stimulate to normal efforts to take away the punch bowl before workers get uppity.

I was pleased to find the post by Bonddad immediately below

However, I don’t agree entirely with Hale Stewart and agree less with Stephan Poloz.

The first point is that expected US inflation has been very stable and very close to the 2% target (also when the target was informal). This is shown by TIPS spreads (as noted by Bonddad) and also in survey’s of people considered expert (say the Livingston survey).

In fact The median Livingston Survey CPI inflation forecast is very well fit using only one observation of lagged PCE core inflation with an R-squared over 85%. It seems hard for the sometimes anchored sometimes not alternative to outperform the static expectations null.

There is no sign that inflation expectations were more anchored after June 1989 than before. The coefficient on the product of lagged PCE inflation and an indicator that the realization of inflation occurred June 1990 or later is statistically insignificantly different from zero and actually positive.

This simple pattern in a well known data set makes the fact that inflation expectations were regularly described as “anchored” a bit puzzling. I think that the expectations augmented Phillips curve was so firmly accepted that economists used “anchored expectations” to imply that unit labor costs were not growing rapidly or perhaps that actual inflation was not accelerating. In the language of contemporary macroeconomics the word “expectations” may refer to what should be expected given the ex post observed behavior of time series, or to what expectations must have been for a standard model to fit the data, but in any case not to any forecast made by an actual human being.

Also when a central banker says expectations are important, he almost automatically asserts that his credibility is important. The argument is that firm resolute determination to fight inflation is unambiguously good as it makes it possible to reduce inflation without persistently high unemployment. The argument is that it is best to firmly grasp the nettle as, for example, Paul Volcker grabbed it. The problem is that there is no hint at all in the Livingston data set that Volcker had unusually high anti-inflation credibility. In fact, the survey data suggests that he was below average in this.

The notoriously weak inflation fighter Fed chairs were Arthur Burns and G William Miller who allowed double digit inflation. Volcker is alleged to have tamed the inflation expectations beast after replacing Miller. There is much less than no evidence for this in the Livingston data

Finally, the argument that anchored expectations elimininate the relationship beteen monetary policy and real outcomes is based on the assumption that Lucas was right and the only unexpected shifts in monetary policy affect output. The hypothesis was that, once economic agents understood the policy rule, the changes in interest rates, monetary aggregates and inflation rates caused by the the policy would be uncorrelated with real variables. Somehow this changed from a hypothesis to a revealed truth. The simple fact that inflation and unemployment are still correlated even now that inflation is stable and can be predicted (which doesn’t mean that real world non rational agents predict it well) is not allowed to touch the faith that this must not be true. It is argued that the apparent phillips curve has vanished even though data just like those plotted by Phillips show a curve.

Here is the average wage inflation over the 15 countries which were in the European Union in 1997 compared to the average unemployment rate. I’d say the Phillips curve still exists now and here (I am in Rome). 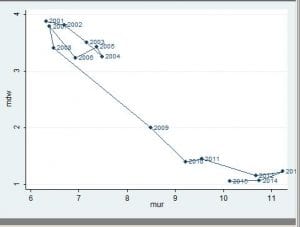 In sum, I think the confidence that inflation expectations matter *and* can be managed by firm resolute monetary authorities is a sign of blind faith and refusal to look at the evidence.