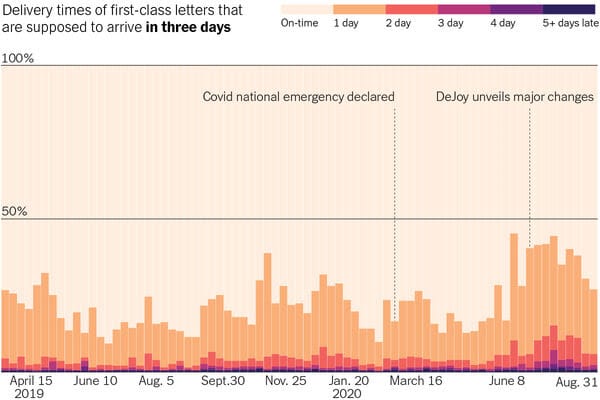 Is U.S. mail delivery becoming slower for First Class mail? A New York Times analysis of more than 28 million pieces of mail found that on-time delivery declined noticeably in July and August. This comes after PMG Louis DeJoy put cost-cutting measures in place. Delivery has sped up slightly since the summer but remains slower than earlier this year. Twenty-eight million pieces of first-class letters were tracked by SnailWorks. The results of the analysis shows how on-time delivery declined noticeably in July after the arrival of the new and politically aligned PMG Louis DeJoy and the start of his mandated policies to trim transportation costs.

It appears mail delivery did slow down in July and August.

As you already know, timely mail delivery has become a key part of the 2020 election outcome due to an unprecedented number of Americans who are likely to vote by mail to avoid visiting a polling place during the pandemic.