I understood how some combinations of drugs work in attacking Covid-19 with one drug acting as an ionophore allowing another drug to enter a cell and attach to Covid RNA stopping its replication. I found this nice chart on National Geographic offering up an educational semi -medical and microbiologist depiction of how Moderna’s new vaccine mRNA gives the human body the ability to attack Covid.  I duplicated the chart with the original wording on Power Point. Click on either chart to make them larger. 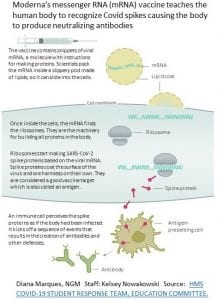 Where we are today, Some history, and Where this is going

Morderna’s mRNA has moved into a Phase III Clinical Trial stage testing in the treatment of Covid-19. It is considered to be more successful than the other drugs and it is being fast-tracked (Operation Warp-Speed [or “Tribble Infestation”]) by the administration. On May 18 of this year, Moderna Therapeutics announced preliminary findings that healthy subjects had responded to mRNA vaccine by producing “neutralizing antibodies” which is how the vaccine works in the treatment of Covid. The antibodies made by the immune system prevent infection by the coronavirus.

When a virus infects a body, the immune system scrambles to recognize and create a response. The more traditional results of vaccine development is the introduction of an inactivated or weakened form of a virus or introduce one of the virus’s viral proteins to the body. The immune system responds to the introduction by producing antibodies to counter the vaccine, recognizing particular proteins of the virus. Those antibodies can fight future infections as long as the virus does not evolve. 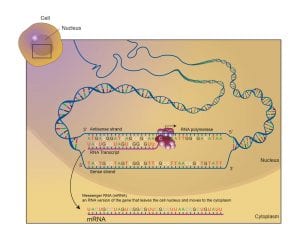 The mRNA vaccine takes a novel or a new and different approach of introducing Messenger RNA of which RNA has never been approved or licensed for human use. One of the pluses of the usage of mRNA vaccine is it can be manufactured faster as it bypasses the traditional methods of producing inactivated viruses or isolating proteins. Messenger RNA ([which mRNA is] a single-stranded RNA molecule that is complementary to one of the DNA strands of a gene) is genetic material made of nucleic acid— the same stuff as our DNA — that travels throughout our cells, giving final instructions on which proteins to build to form the body’s cellular architecture.

Plasmid DNA and now mRNA vaccines have generated significant interest and efforts because of their potential as platform technologies that could be used for a variety of applications ranging from prophylaxis to therapy and from personalized medicine to global health solutions. Both can be quickly made with fairly generic manufacturing processes and can be constructed directly from the genetic sequence of the desired protein, whether the origin of the protein is human or from a pathogen. For vaccines, making a gene construct coding for the antigen instead of inactivating or attenuating the pathogen, or instead of making a recombinant protein, is vastly easier, more rapid, and avoids potential risks of working with live pathogens. Likewise, the vaccine construct can encode only the key antigen without including other proteins that may be either deleterious (such as toxins) or that may be irrelevant for protection yet immunodominant.

I can’t put my finger on which book it was (“The Prey?” – there are others). This reads almost like a Michael Crichton story where man tampers with DNA and causes harm to himself. “In the early 1990s, scientists wondered what would happen if they manufactured pieces of viral DNA (and mRNA) and then injected them into human cells or lab animals. The hope was that the cells would take in the genetic snippets, make viral proteins, and trigger an immune response.”

Moderna Therapeutics came to rely on a popular tool for drug delivery called lipid nanoparticles (similar talked about in “Prey”). By packing genetic material inside a slippery pod made of oily lipids, these particles could easily slide mRNA into cells, where it could go to work. With safer mRNA technology and better drug delivery, the company was able to expand its portfolio and pursue remedies for cancer and a range of infectious diseases , including the flu.

From what I am reading in various sources, mRNA appears to be programing cells to recognize the virus by using the genetic sequence of the desired protein, whether the origin of the protein is human or from a pathogen, injecting it into the cells utilizing a lipid coating, and using it to instruct the Ribosome within cells to produce antigens impacting cells to create the antibodies. The cell is programmed by injecting genetic material into a deltoid, etc. muscle, giving cells a blueprint for making the spike protein receiving mRNA used  to initiate the creation of antibodies (see chart) before being exposed to Covid.

This is new, terribly interesting, and fraught with potentially dangerous reactions as we scurry along under this administration’s demands.

“Dozens of COVID-19 vaccines are in development. Here are the ones to follow.”, National Geographic, Amy McKeever, September 14, 2020

“A Comparison of Plasmid DNA and mRNA as Vaccine Technologies“,MDPI, Margaret A. Liu, April 19, 2019

“A Comparison of Plasmid DNA and mRNA as Vaccine Technologies“,MDPI , Margaret A. Liu, April 19, 2019