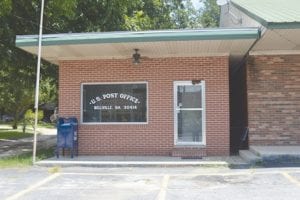 I’ll tell you all a story that I think you’ll understand
Traveling through Georgia, rambling across the land
I passed the Bellville Depot and something said to me
Stop here son, there’s something you should see.
— Tom T. Hall, “God Came Through Bellville Georgia”

Bellville is a very small town (pop. 123 in 2010), but it was once a thriving railroad community. Established in 1890, it was “named for James Bell Smith’s mother, who was Miss Fannie Bell before her marriage. The railroaders called it BELLEVILLE, supposedly named to honor the lovely ladies of the town.” 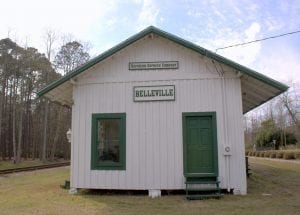 A few weeks ago, the Postal Service informed residents of Bellville that their post office would be closing on August 31. Services, including PO boxes, will be relocated to another facility a couple of miles away.

Bellville has appealed the decision to close its post office to the Postal Regulatory Commission. The Postal Service wants the appeal dismissed on the grounds that the post office is not a post office. I’m not joking. Here’s the story.

On July 24, Bellville’s City Attorney Dylan Mulligan filed an appeal with the PRC based on the claim that the Postal Service “has failed to adhere to the applicable laws and regulations governing the discontinuance of post offices, in particular the requirements of 39 U.S.C. § 404(d) and 39 C.F.R. § 241.3.”

These statutes, as the appeal notes, require that the Postal Service provide the public with notice that a closure is being contemplated, that the public has an opportunity to comment (in letters and a questionnaire and at a meeting), and that a Final Determination be posted at the post office indicating that an administrative record is available for public inspection and that anyone may appeal the closing decision to the PRC.

The Postal Service does not deny that it failed to take any of these steps. Rather, it says they’re not required. In its motion to dismiss the case, the Postal Service claims that these statutes apply only to USPS-operated “Post Offices” and not to contractor-operated retail facilities like the one in Bellville.

In fact, according to the Postal Service’s argument, the Bellville post office hasn’t been a post office since 1966. 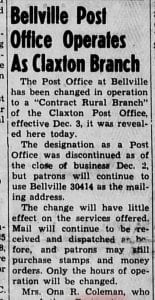 “The change,” said the Enterprise, “will have little effect on the services offered. Mail will continue to be received and dispatched as before, and patrons may still purchase stamps and money orders. Only the hours of operation will be changed.”

Not only that, but the Acting Postmaster was the successful bidder on the contract, so she continued to operate the post office. No doubt patrons continued to call her postmaster (or postmistress). For all intents and purposes, nothing had really changed.

By that time, the official designation had changed to “Community Post Office” (CPO), the name given to contract units that had been converted from offices operated by postal employees. (There’s also something called a Contract Postal Unit, or CPU, which is used for contract facilities created from scratch.)

As it turned out, the post office remained open, thanks to a moratorium on closings implemented by the Postal Service as a result of pressure from Congress and the public.

But the reprieve was temporary. In April of 2012, the Postal Service terminated the CPO contract. But the post office did not close completely. Instead, it went through yet another downgrade.

On June 27, 2012, the Postal Service replaced the Bellville CPO with what it calls a “Village Post Office” (VPO). While CPOs and CPUs offer the same products and services as USPS-operated Post Offices, VPOs offer only Forever Stamps, flat-rate boxes and sometimes, as in Bellville, Post Office Boxes as well.

These VPOs, if you’re not familiar with them, were the Postal Service’s answer to all the criticism it was getting for its 2011 plan to close thousands of post offices. The idea was to placate the small towns losing their post office by replacing them with postal counters in an existing business. There were going to be thousands and thousands of them. The idea never caught on. There are now a few hundred of them.

For the people of Bellville, a VPO was probably better nothing. At least they had a post office. Then last month Bellville customers were informed the post office would be closing on August 31, 2020.

The Postal Service’s motion to dismiss the appeal is based on a series of PRC appeals involving contract facilities. The gist of its position is that the discontinuance statute was never intended to include contract units, and the PRC should stay out of the Postal Service’s way when it makes and terminates contracts with CPU and CPO operators. 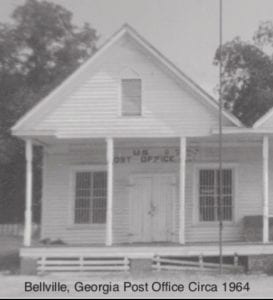 In 2012, however, the PRC changed course and began rejecting appeals if the contract unit wasn’t the “sole source” of postal services in the community, a phrase that had appeared in its order on one early appeal (Green Mountain, Iowa 1994). Several appeals on contract units have now been dismissed, and each dismissal adds another precedent to the string. It will be hard to undo that now.

The Postal Service’s motion to dismiss is supported by comments from the PRC’s Public Representative that essentially repeat what the Postal Service has said. These PRs are members of the PRC staff “designated to represent the interests of the general public in public proceedings that come before the Commission.” Note that the PRs represent the interests of the “general public” and not necessarily those of a particular community like Bellville.

Mr. Mulligan points out that “the actual Bellville Post Office continues to be housed in its own, freestanding building, which is clearly designated “• U.S. Post Office • Bellville, GA. 30414” by prominent signage displayed on the front window. Mail is delivered to and collected from said Post Office by Postal Service employees.”

As for the so-called “sole source” test, Mr. Mulligan points out that “Bellville proper is home to a large population of elderly citizens with limited mobility, who rarely leave the city limits of Bellville, and who increasingly rely on the Bellville Post Office for their sole mail services.”

In other words, the Bellville Post Office is in fact the “sole source” of postal services in the community. The Postal Service and PRC have heard that one before, but they’ve figured out how to deal with it. They just change the definition of “community” so that it encompasses other communities nearby that still have a post office. They also note that one can always do some postal business online.

Mr. Mulligan ends his reply brief with these comments:

“Local Post Offices are vital aspects of every town and city — both large and small — and continue to hold a certain reverence in the eyes of the citizenry. Indeed, many towns, such as Bellville, trace their very founding to the establishment of a United States Post Office. Generations of Americans have placed their trust and confidence in the Postal Service, and Bellville is no exception — the Bellville Post Office having served its community faithfully for one hundred thirty (130) years. The postal regulations cited herein exist to protect postal customers and provide them with an opportunity to engage with the Postal Service and express their sentiments in situations such as this.

“The Bellville Post Office was summarily closed with no explanation given to the affected customers, nor were said customers given an opportunity to comment, voice their concerns, or propose alternatives. A closure in such a manner diminishes the trust and confidence which the citizens of Bellville have placed in the Postal Service. Therefore, it is in the interests of public policy for this Commission to take jurisdiction in this instance and consider this appeal.”

You won’t find a more eloquent explanation for why post offices are so valuable and why every community, regardless of what type of post office it has, should be entitled to the right to appeal a closure and have it heard.

Unfortunately, eloquence will not convince the PRC. The appeal is going to be dismissed. The only thing that will save the Bellville Post Office is intervention by a member of Congress. Or perhaps a realization at USPS headquarters that this is not a good time to be closing any post office, even one in a small place like Bellville, Georgia.

UPDATE, 8/28/20: The Postal Service informed the PRC that it was pausing the closing of the Bellville post as part of its pause on “certain activities until after the election in November 2020.” Apparently one or more members of Congress were able to influence postal headquarters.