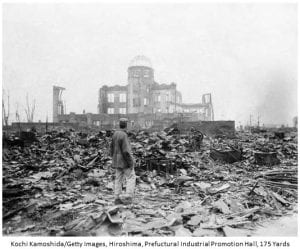 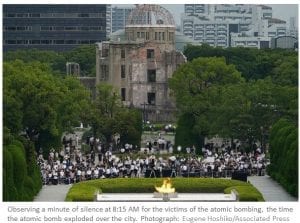 August 6th a US bomber escorted by 5 other planes drop a lone bomb which exploded over the city of Hiroshima at 8:15 AM, creating a firestorm destroying an estimated 70 percent of the city and killing an estimated 70,000 Japanese. Today is that day when what is left of the hibakusha, the survivors of the atomic bombings of Hiroshima and Nagasaki as they are known in Japan, gather at the Hiroshima Peace Memorial Park to mourn the city’s destruction by the American military during World War II, and to serve as a living testament to the abiding dangers of the atomic bomb.

Today marks the 75th anniversary of the nuclear assault and the remaining hibakusha were diminished, victims of the twin forces of the coronavirus pandemic and advancing age. Despite the health risks, a relatively small number of survivors attended this year. They believed that “they’ve come this far” and “can’t quit,” the chair of the Hiroshima branch of the Japan Confederation of A-and H-Bomb Sufferers’ Organizations, Kunihiko Sakuma said. City officials and peace activists had envisioned a series of grand events to commemorate what will most likely be the last major anniversary of the bombing for almost all of the hibakusha still living.